Two of the most dramatic movements of “Pictures at an Exhibition” are “The Hut on Fowl’s Legs (Baba Yaga)” and “The Great Gate of Kiev”.  Fortunately for our discussion here, both of the Hartmann images have survived.  These two pictures inspired Mussorgsky to write some of the most memorable music in the entire suite. The first of the two images is of an ornate clock in the figure of a hut or house.   The house stands upon the legs of a chicken. 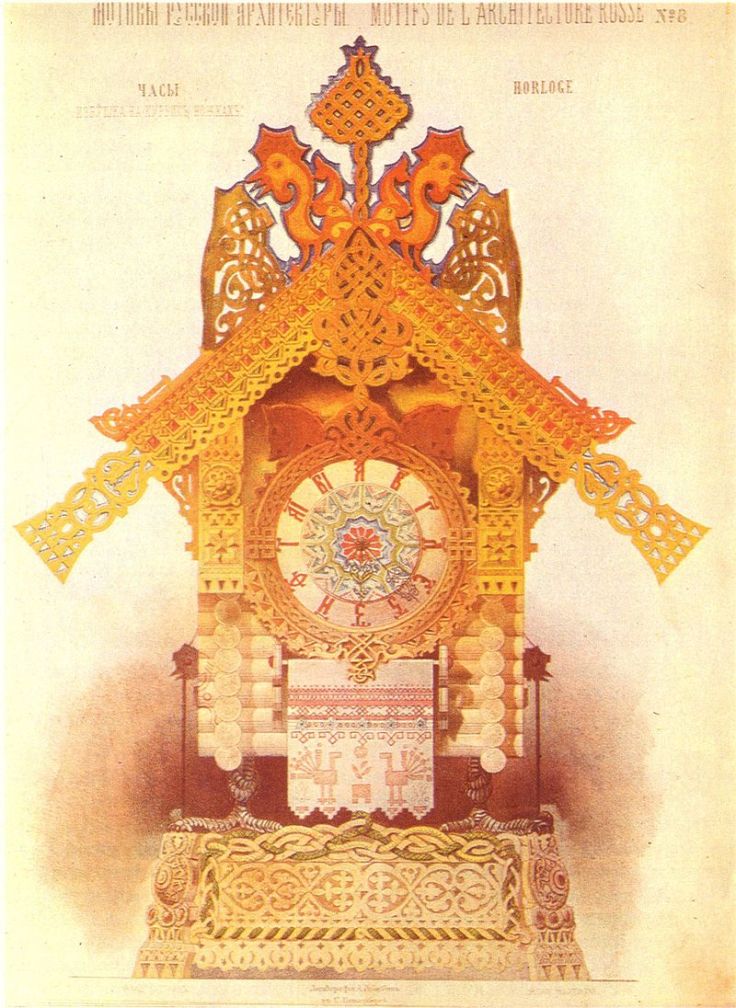 This image would be immediately recognizable to any Russian, especially one who was scared as a child with the story of Baba Yaga.  This story has many different variations, and several parallel stories in other cultures.  Baba Yaga was a Slavonic supernatural witch, who lived in a fearsome hut in the woods.  The hut stood on chicken legs, and would magically rotate to face each new person who happened upon it.  She would lure in lost children, and eat them for dinner.  Baba Yaga flew around on a large mortar, steering with a pestle, and used the mortar and pestle to grind up the bones of the victims upon which she dined.  In most versions, there also is a broom which sweeps away her tracks.  I imagine this story was used as a morality tale, to scare Russian children into good behavior, lest they be sent into the woods to face Baba Yaga.   Before we judge this child rearing tactic too harshly, we should remember Grimm’s fairy tales were also pretty gruesome before Disney got their hands on the stories.

Mussorgsky drew upon both the image, and the tale it invokes when writing his section of “Pictures” to accompany this Hartmann creation.  Here is the original piano version.

Modest Mussorgsky: Pictures at an Exhibition: The Hut on Fowl’s Legs (piano version)

This dramatic music invited some brilliant orchestration from Maurice Ravel in the most popular orchestral version.  There are an endless supply of recordings of the Mussorgsky/Ravel version, but one of my favorites is by Sir Georg Solti with the Chicago Symphony Orchestra.

Modest Mussorgsky: Pictures at an Exhibition: The Hut on Fowl’s Legs (orch. Ravel)

As we saw in the previous post, Mussorgsky’s music has withstood transformations into versions he never could have imagined.  My newest favorite is by the progressive rock trio Emerson Lake and Palmer.  Their recreation of “Pictures” can be heard complete at the end of the previous post, but here is the Baba Yaga selection to sample.

Modest Mussorgsky: Pictures at an Exhibition: The Hut and the Curse, Baba Yaga – Emerson Lake and Palmer

The big finale of “Pictures” comes in “The Great Gate of Kiev”.  This image has a real world story behind it.  In April of 1866, there was an attempted assassination of Tsar Alexander II, one from which he escaped, and survived.  Following this close brush with death, a contest was held to design a gate to the entrance to the city of Kiev to commemorate/celebrate the survival of the Tsar.  Viktor Hartmann thought that his design for the city gate was some of the best work he had created.  Sadly, the contest was called off, and no gate was ever built.  Hartmann’s design was included in the memorial exhibition that Mussorgsky attended.  The exhibition catalog listed this image as “Stone city-gates for Kiev, Russian style, with a small church inside”.

Kiev was the birthplace of Christianity in Russia, in 988 when Vladimir of Kiev converted to Christianity and ordered a mass baptism of his subjects in the local river.  (No need to win the hearts and minds of your subjects, when you can just order them around.)  This Christian theme is reflected in Hartmann’s design by the small church on the right of the image, with three bells in the tower.  Another description of the gate indicates that there was to be an inscription above the arch that read “Blessed is he that cometh in the name of the Lord” (in Russian, of course).  Mussorgsky’s music is a grand statement that matches this grand image, and borrows from a Russian hymn.  It is a proper finale to the suite, and simply oozes Russianness.

Modest Mussorgsky: Pictures at an Exhibition: The Great Gate of Kiev (piano version)

This grandiose finish to the piano suite just begs for orchestration, a task which has been performed by a large number of people (as we have seen).  Here is the ever-present Ravel version.

Modest Mussorgsky: Pictures at an Exhibition: The Great Gate of Kiev (orch Ravel)

When Leonard Slatkin performed his compendium version of “Pictures” at the Proms in 1991, he had the opportunity to do something special.  In Slatkin’s version, a different orchestrator was chosen for each movement.  The finale was performed in the Ravel orchestration that we find in the above video.  As an encore to the successful concert, Slatkin was able to repeat the finale in a different orchestration.  To close the concert, he very appropriately chose the version created by Sir Henry Wood, the founder of the Proms in England.  Leonard Slatkin’s enthusiasm for “Pictures” is what began this series of posts, so it is only fitting that I end with him conducting that encore.

Modest Mussorgsky: Pictures at an Exhibition: The Great Gate of Kiev (orch Wood)

3 thoughts on “Exhibitionism Part 3: Showing it All”