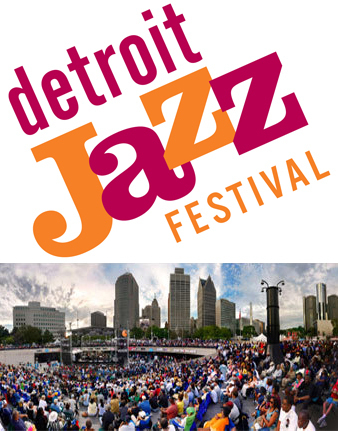 I guess I am a creature of habit from time to time.  Just about everyone who knows me knows where to find me on Labor Day weekend in Detroit.  One of my favorite events of the year is the Detroit Jazz Festival at Hart Plaza, and now expanded all the way up to Campus Martius Park and Cadillac Square.  I have been going every year, minus a few in the dark ages, since before I was old enough to drive.  I date myself sometimes by still calling it Montreux, from the days it was the Montreux-Detroit Jazz Festival.  Over the years I have seen some of the greatest legends in the world of jazz play live, and best of all, for free.

Weather is sometimes a friend and sometimes not.  I have sat in the amphitheater stage while it misted rain and the show still went on.  I have been there when it was 93 degrees out, and when it was 47 degrees on the waterfront.  Actually, that was all in the same weekend!  It was the only year I know of where an act actually had to be cancelled, when a thunderstorm with lightning forced the Sun Ra Arkestra to relocate indoors away from Hart Plaza. 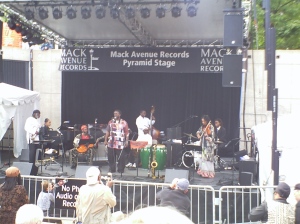 Everyone’s experience at the festival is different.  With four + stages of music all happening at once, no one can hear everything.  I am in the habit of pouring over the schedule when it comes out and trying to pick out what I think I want to see.  Aficionados know some of the best sets are with the local artists on the pyramid stage or the waterfront stage.  The absolute best moments are some of the unscheduled, spontaneous events, like when world class friends and musicians sit in with each other on stage.

My favorite source of food is the Slow’s to Go stand for barbeque, with the Dirty Dog Jazz Cafe stand up at the Cadillac Square stage being a close second.  A short walk from the festival map at Campus Martius Park will lead you to Detroit’s dueling Coney Islands, the National Coney Island and American Coney Island that are right next to each other.  They were started by brothers, and each claims to have the best hot dog smothered in chili and onions in the world. Try them both!  I’m too much of a beer snob to pay $7 for a Bud Light at the festival, so I usually try to pack in my own.  I’m not above drinking cheap beer, but not when it’s expensive!  Likewise, it’s easy to find a fella hustling drinks from a cooler to get cheap bottled water, tea or soda.  Shop smart, not hard!

This year the one set I am most excited about is the very first music opening the festival.  The Bad Plus is a trio I have followed for a few years now, and they are starting the festival with Joshua Redman sitting in on saxophone.  Redman is this years Artist in Residence, and will play on several sets over the weekend.  I’m actually not familiar with too much of Joshua Redman’s output, but hearing new stuff is one of the great things about the Jazz Fest.  Check out their web site and come on down to check out the music.

I’m actually really looking forward to the “surprise guests” that will be there on Saturday at 7:00pm at the Pyramid Stage to be with the Detroit Jazz Festival All Stars.  Jazz Festival surprises are always good!