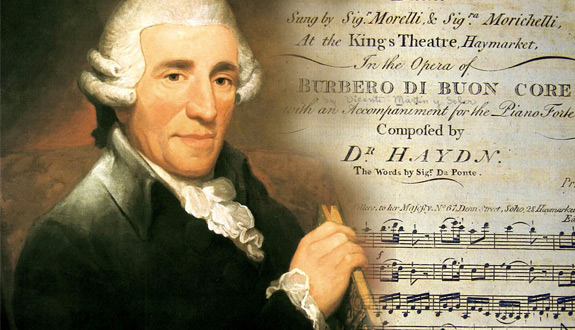 Franz Joseph Haydn is one of the three giants of the Viennese Classical Style of music, along with Mozart and Beethoven.  The works of these three men, in a style of music from the late eighteenth century, are still some of the most studied, recorded,  and performed works in the genre of “classical” music today.  Before any of my country-folk here in America can heckle me with sentiments like, “Why would anything from the 1700’s  relate to my life today?”, I would ask my fellow citizens to tell me what year the Constitution of the United States was written.  You know, that document that the highest court in the land parses to decide some of the most important cases of our time.  Age is not a disease, and history has a way of highlighting the best and strongest contributions of an era.  We don’t record music on eight-track tapes anymore, but we are still recording Beethoven Symphonies and always have, on vinyl LP, cassette tape, compact disc, mp3, Itunes and will continue to record them on whatever is state-of-the-art next.

The late eighteenth century was the Age of the Enlightenment, and the intellectual and aesthetic influence of Enlightenment thinking on music is summed up by Professor Robert Greenberg in a quote from his lectures How to Listen to and Understand Great Music:

The Enlightenment’s impact on musical style was enormous. The Enlightenment’s new spirit of individualism was reflected in the more melodically and expressively flexible Classical-era style. The Enlightenment belief that the best music is that which appeals to the greatest number resulted in a doctrine of accessibility that evoked Classical Greek aesthetic, focusing on clarity and beauty of line (melody), balance and purity of form (clear phrase structures and carefully wrought musical forms), and expressive restraint and good taste.

One of the biggest contributions of Haydn and the Viennese Classical Style to instrumental music is Sonata Form.  Sonata Form goes by a couple of names in textbooks, but whether you call it “Sonata-Allegro” form or “first movement form”, you will find it in almost all forms of instrumental music from small to large from this time.  Charles Rosen gives the best one sentence description of the school book recipe for Sonata Form in his book The Classical Style:

After being a dutiful student and learning this Jello-mold framework view of Sonata Form, I set out to look at some of the musical output of the Classical Period and hit a bit of a roadblock with Haydn.  This composer is one of the Big Three of the age, giving us 106 symphonies, 68 string quartets, 62 piano sonatas in addition to masses, oratorios, operas and more.  Men by the names of Landon and Hoboken have made entire careers of simply cataloging Haydn’s music.  I thought if I looked at one of the most important composers of the age, and searched for the most important musical form of the age, I would find dozens of perfect examples of Sonata Form.  I owned the decoder ring, and should be able to understand everything about Haydn’s first movements.  Needless to say, I was quite wrong.

Monotheism.  That was the first roadblock I encountered in starting to learn the music of Haydn.  He wrote many of his Sonata Allegro movements with only ONE theme.  I was armed with the understanding that Sonata form presented two themes, one in the tonic and the next in the dominant, then mixed them together in the development and resolved everything in the recapitulation by having both themes in the home key.  How can you bloody well make a Sonata form with only one theme?  You have no second theme to contrast it with.  What do you mix together and chop up in the development?  You have nothing to move back to the home key in the recap?  In truth, this was only the first way I found that Haydn deviated from my student understanding of Sonata form, and eventually I listened to less and less Haydn.  There was an ocean of musical works by Franz Joseph, and I had no way of sorting out which ones I could make sense of and which would remain a mystery.  I moved on to Beethoven, because that dude only had 9 symphonies and 16 string quartets which seemed like a smaller body of water to get lost in.  (I was wrong about Beethoven too.)

The problems I was having in understanding Haydn’s music were not the fault of Haydn, but rather the inadequacy of my understanding of Sonata Form.  Haydn, Mozart and Beethoven would likely not even recognize that school book description of the process.  The Wikipedia version of Sonata Form actually stems from the writings of music theorist from the NINETEENTH century, men by the names of Antonin Reicha, Adolph Bernhard Marx (no relation) and Carl Czerny.  Czerny had the most influence with his book School of Practical Composition written in 1848.    All three of these men were part of the deification of Beethoven in the middle 1800’s, and were writing handbooks and guides for composing new music with generalizations from the early works of Beethoven. Those generalizations were collected as the things most important to the aesthetics of the nineteenth century, and frankly the things one might be able to successfully copy from early Beethoven.  What this definition of Sonata Form is NOT is a good historical understanding of the thought process of composers of the Classical period.  The school book definition of Sonata Form, making things into  a bundt cake pan of ingredients, doesn’t do justice to the process or practice of the composers of the Classical Period.

I recently stumbled upon the Opus 50 String Quartets of Haydn, a set of six quartets dedicated to the King of Prussian.  Most of the reason I steered myself to these “Prussian” quartets was finding a copy of the Cambridge Music Handbook on the works by W. Dean Sutcliffe. Looking closer at this set of pieces by Haydn has inspired in me a renewed interest in theories of Sonata Form.  The volume on the subject Sonata Forms by Charles Rosen is truly indispensable, because he never loses a historical context and connection to actual musical examples when discussing the practice of composers in the Classical Period and beyond.  The sort of linear analysis of Heinrich Schenker is very influential, but often critiques form as simply a foreground manifestation of an underlying contrapuntal-harmonic motion.  (It seems Schenker heard everything as a prolongation of a basic I-V-I progression, at least any music worth listening to 🙂 ) In theoretical discussions of Sonata Form, there is a tonal-polarity model, a tour-of-keys model, a very interesting book by William Caplin on Classical Form that I am working through and a very powerful volume by James Hepokoski and Warren Darcy on Elements of Sonata Theory that I hope Amazon delivers to me soon.  One of the most interesting points about the music of the eighteenth century I found was in John Irving’s book on the Mozart string quartets dedicated to Haydn:

Topical associations represent a dimension of meaning for the music of Mozart’s time that was almost wholly lost during the nineteenth and twentieth centuries, and which has only in recent times regained the attention of musicologists, most especially Leonard Ratner.  ‘Topics’ were recognisable ‘codes’ according to which music was both composed and understood and thus provided a contest for communication between the composer, the performer and the listener in the classical period – a kind of musical vernacular.

When I started listening to the first quartet in Haydn’s Opus 50, this thought of some “topical association”, a specific meaning associated with a musical gesture became very useful to my understanding of Haydn’s personality peeking through the first movement.  Haydn was a man of considerable wit and humor.  The opening of the B flat Quartet, Opus 50 number 1 has the cello playing eight quarter notes on B flat.  Charles Rosen points out the humor :

There are two measures of one note softly repeated by the cello, a tonic pedal.  This is a charming joke: Op. 50 no. 1 is the first of the quartets written for the King of Prussia, who was a cellist.  Accordingly the set opens with the cello all by itself, playing a motif hardly taxing to the royal virtuosity – a solo on one note.

The next two measures are the key to my understanding of the movement.  In Haydn, as Rosen points out, everything comes from the theme : out of the character of the theme and its possibilities of development arises the shape of the musical discourse. The quartet plays in measures 3-4 a musical figure which Haydn’s audience would have immediately recognized as a cadential figure, a closing/ending motion.  It is like he is cleverly winking at the listener and beginning his story with “The End”.  An eighteenth century ear would have made this “topical association”, and once I did I could recognize the playfulness of the movement.  The ear would expect to hear the violin figure in moving down in sequence twice to a perfect authentic cadence in the tonic. Instead, Haydn moves the musical motive upwards and spends the movement combining and expanding the combination of the cello repeated note figure and the violin’s cadential figure.  The movement is in a Sonata form: monothematic, but having an exposition/development/recapitulation, movement from the tonic to the dominant and tonal resolution in the recapitulation.  What the movement is really about however, is the five minutes or so of anticipation, expectation and delayed gratification as Haydn plays all around this closing figure and finally delivers satisfaction in the final 15 measures, where we hear the closing figure as we expected it to go, AT LAST.  Much more was revealed to me by hearing the inside joke and this element of delayed gratification than was revealed in labeling the exposition, arrival of the dominant harmony, development and recapitulation.  All of those elements are in the music, but I don’t think I heard what Haydn intended or how his contemporaries heard the work until I realized the meaning in the opening four measures.

Here is the full four movement quartet by Haydn, with what I assume is a painting of the King of Prussia and his entourage.