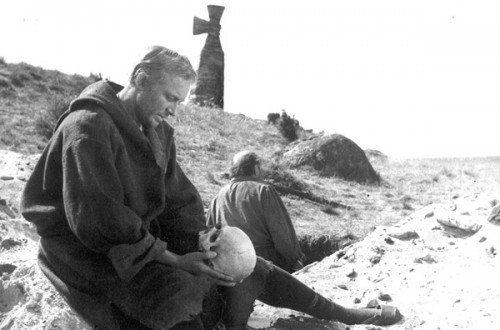 The other Russian films that I have spent time with recently, are both adapted from Shakespeare plays.  The tragedies and comedies of William Shakespeare have garnered a lot of my attention in recent weeks.  There are dozens of well done film versions of the Bard’s works, but some very smart person turned me on to the fact that one of my favorite composers, Dmitri Shostakovich, composed film music for  Russian versions of Hamlet and King Lear.  I had no idea!  My intellectual pride was dented enough that I went straight to Amazon to find DVD copies of the two films.

Shostakovich composed the musical score to the 1964 film of Hamlet, directed by Grigori Kozintsev.  This version was in the Russian language, taken from a translation by Boris Pasternak.  It is a very odd experience for me to watch this play, originally in Shakespeare’s English, translated into Russian, only to have me reading the subtitles in English again to know what is being said.  Not exactly the shortest route, but it gets me there.  A great Russian actor by the name of Immokenty Smoktunovsky plays Prince Hamlet in the film.  I recently have viewed a half dozen or so different movie versions of Hamlet, and the Kozintsev film truly is an important one to see.

Hamlet the play is one of the longest Shakespeare plays, written about 1600, right in the middle of Bard’s career.  It was published in a couple of different versions, and putting together all the material from each version creates a lengthy play, over four hours long.  One of my favorite film versions is the 1996 Kenneth Branagh film, an unabridged theatrical film that leaves nothing out.  Branagh plays the lead, adapted the play, and directed the movie.  My impression is that he gives us all the lines that Shakespeare wrote, but by doing so we get a bit of a hybrid version that was not ever performed precisely this way in Shakespeare’s lifetime.  Still, I like almost everything about the film, even if I have some reservation about the “Errol Flynn-esque” way that Claudius gets killed in the end.

Most movie versions of Hamlet are a little over 2 hours long, and the Kozintsev film is about 2 hours  20 minutes.  Clearly, to edit the play down to this scale means a good deal of cutting has to happen.  A huge amount of interpretation happens in making these cuts, deciding what to emphasize and what to downplay.  The 1948 film adapted, directed by, and starring Laurence Olivier, cuts out almost all of the political action.  Olivier emphasized the personal, internal struggle of the brooding Danish Prince, and provides a very Freudian interpretation.  The Oedipal overtones of the interactions between Hamlet and his mother Gertrude are strengthened by the casting, with the 41 year old Olivier playing Hamlet opposite a 28 year old Eileen Herlie portraying Gertrude.  Hamlet is a play that directors must wrestle with, make their own, and have a strong artistic vision to even decide how to adapt it for film.

Kozintsev does some very wonderful things with his film.  Unlike Olivier, Kozintsev preserves both the personal internal struggles of Prince Hamlet as well as some of the political themes.  Some of the soliloquies are presented as voice overs, something one can do in film that couldn’t be done in a live theatrical production.  The film is created with a very strong conception, and Kozintsev presents his conception with great clarity.  There are times when the content of the play is presented visually, without the original dialogue, but with cinematic imagery.  The early scene featuring the characters waiting for the appearance of the ghost of the dead king is one example.  Grigori succeeds in preserving the scope and architecture of the play, even with a truncated script.

The strength of the music by Shostakovich further reinforces the overall aesthetic vision that Kozintsev had for his version of Hamlet.  I have listened to a great deal of Dmitri Shostakovich’s music, but until recently had not heard his music for this film.  It is instantly recognizable to me as Shostakovich, his musical voice is readily apparent.  The music for the film was praised from the beginning.  The reviewer for the New York Times in 1964 was Bosley Crowther, who made note of the music in the following quote:

“Since the dialogue is spoken in Russian and the English subtitles are slim—just few words each time, from Shakespeare’s text, to cue the audience in—it goes without saying that the dialogue, the verbal poetry, means little in the film. It doesn’t even have a noticeable cadence to rouse the emotions through the car.

But the lack of this aural stimulation—of Shakespeare’s eloquent words—is recompensed in some measure by a splendid and stirring musical score by Dmitri Shostakovich. This has great dignity and depth, and at times an appropriate wildness or becoming levity. In the scene of Ophelia’s burial, for instance, it is light but significantly weird, carrying on with a new note of poignance the strain from Ophelia’s mad scene.”

In 1971, Grigory Kozintsev directed a version of King Lear, again with a translation of the Shakespeare play into Russian by Boris Pasternak, and a musical score by Dmitri Shostakovich.  This was only two years before Kozintsev’s death, and four years before Shostakovich’s passing.  I always think of the pile of bodies on stage at the end of King Lear, a play four hundred years old, and smirk when people complain of how the violence on television or in video games is ruining society.  The video games, television programs, or four hundred year old Shakespeare play don’t cause people to be violent, they are merely a reflection of the dark side of human nature.  People have been harming each other all the way back to Cain and Abel.  Violence is not a new invention of the twenty-first century.

In an interview with Ronald Hayman of The Transatlantic Review in 1973, Kozintsev had this to say about working with Shostakovich:

“I’ve been working with Shostakovich my whole life, and I think his understanding of the whole tragic and grotesque imagery in Shakespeare is perfect.  And in King Lear I didn’t use just dignifying fanfares and drumrolls.  There is also the voice of suffering.  I love the pipe music he composed for the Fool.  I think this is a real voice of Shakespeare, and I’m very grateful to Shostakovich.  When I hear Shostakovich’s music, I think I’ve heard Shakespeare’s verse.  It is possible to cut some of the verse if you have his score to substitute, and I actually did make cuts specially because of music he wrote and in many places of my script, before I begin to shoot, I know I will be using not human voices, but the voice of Shostakovich’s music.  In the storm scene, for instance, the main voice is the music.  It’s a victory of evil, the whole power of the evil of cruelty. “
The musical scores of Dmitri Shostakovich are integral parts of both the Hamlet and King Lear films directed by Kozintsev.  I have enjoyed the time I have spent with both films, and am so glad they were pointed out to me.