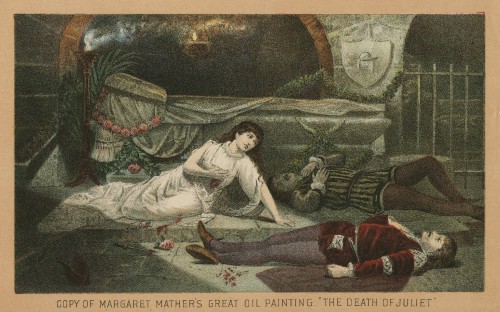 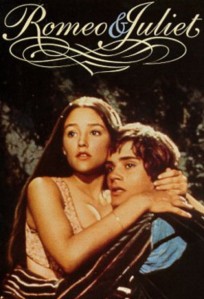 I just finished watching the 1968 film version of Shakespeare’s Romeo and Juliet, directed by Franco Zeffirelli.  The play is by far the most popular of Shakespeare’s plays, and I believe it is the earliest effort in the genre of tragedy that we have from the Bard.  The story is ubiquitous, and I hardly can imagine a rock to turn over where you wouldn’t find someone familiar with at least the outline of the play.  Even if you weren’t familiar, it is a tragedy, and as such really does not have any huge surprises.  It will turn out badly, everyone will die in the end, and the audience only has to sit there and watch it all unfold.  There is no suspense, as in a melodrama, where things may possibly turn out good in the end, just maybe.  Shakespeare makes it clear in the prologue of the play that the star-crossed lovers will die in the end.

Zeffirelli cast two unknown young actors in the lead of his movie, Leonard Whiting as Romeo and Olivia Hussey as Juliet.  It was a bit of a risk, to place such weight of the production on two young people under the age of 18.  It worked out brilliantly, as the film remains a classic version of the play even until this day.

Interview with Whiting and Hussey

Zeffirelli has to edit and interpret the play, because Franco cannot leave well enough alone.  The biggest diversion from the original that I see is in the ending of the play, where Romeo encounters Paris at the tomb of Juliet.  In the film version, Paris is absent at the end, and action is streamlined to Romeo encountering what he believes is a deceased Juliet.  With my musician’s ears, the most distracting part of the film is not the changes in the text of the play, but the sentimental love theme in the soundtrack.  I suppose the musical melody is good enough the first time, or first dozen times it is heard.  My problem is that it does not wear well, and by the end of the film it seems a distracting sentimental bit of mush that detracts from my enjoyment.  You can hear the melody I am referring to in the opening of the trailer to the film.

Trailer for Romeo and Juliet, 1968

I studied the Overture-Fantasia  to Romeo and Juliet by Tchaikovsky for the brilliant orchestration, but my favorite musical setting of the play is the ballet version composed by Sergei Prokofiev (1892-1953).  I think it is because of the familiarity of the story that the play is ripe for a ballet setting.  The audience knows the action, even without the text, and can follow a long story with only music and dance.  Sergei Prokofiev composed music for a ballet in 1935, following a synopsis of the play written by Adrian Piotrovsky.  Originally they had substituted a happy ending for the star-crossed lovers, but further revisions restored the tragic ending.  The ballet languished unperformed for five years, only receiving its premiere in Leningrad in January of 1940.

Prokofiev extracted three different orchestral suites from the complete ballet.  These suites are performed and recorded fairly regularly, and represent some of the composer’s most familiar music.   I think my musical brother Mike prefers Dmitri Shostakovich to Prokofiev, and Sergei Rachmaninoff to almost everyone, but certainly Prokofiev is one of the major Russian composers of the twentieth century.

Tchaikovsky, Overture-Fantasia to Romeo and Juliet

Prokofiev, Romeo and Juliet Suite No. 2

12 thoughts on “Romeo and Juliet”