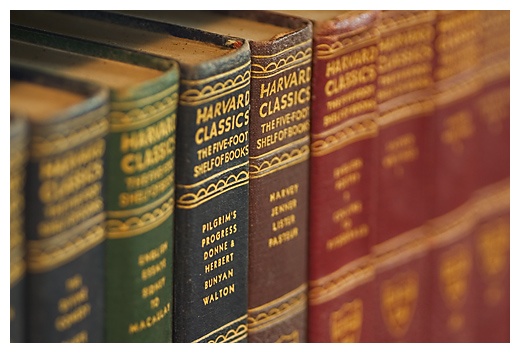 I came of age as a bright-eyed student in the middle of another flare up of the canon wars.  Not “cannon”, as in the large gunpowder piece of artillery that shoots steel balls between pirate ships.  Not “Canon” the camera company, in some sort of field battle where photography equipment is launched across a field using catapults.  In this case I am referring to “canon” as in a body of historical works in music/literature/art that are recognized as masterpieces worthy of study.  There have been many attempts to establish and codify what constitutes the “Western Canon” over the last 150 years in literature, philosophy, political writing, music, art and drama.  The idea of the “Western Canon” is central to educational perennialism. It is the thought that there are pertinent issues and ideas that are relevant to all humans everywhere throughout history.  All humans are people, and learning should first be about people and principles that apply to all people and the human condition. 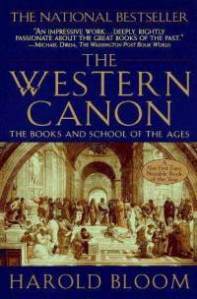 An early attempt to make a list of books to be included in the “canon” was done by Dr. Charles Eliot, a president of Harvard University who collected a set of “Harvard Classics” in 1909 (proving that this argument is over 100 years old).  More recently, the Great Books program of the University of Chicago has sparked great debate in the late 1980’s and 1990’s.  Allan Bloom wrote a book called “The Closing of the American Mind” that outlined his thoughts of how higher education has failed students by not using the great books more.  The brilliant Harold Bloom (no relation) wrote a book in 1995 titled “The Western Canon” which also promoted the idea of a body of works that are authoritative in western culture and should be taught.  Harold is a brilliant man and professor of Humanities at Yale, a thoughtful guy who suffers from insomnia and spends nights reading just about everything.  He has all the credentials to suggest what might be a good book.  However, every attempt at creating a list of canonical works has been controversial.

The problem with making a list is that it divides the world into two parts;  those things on the list and those that are not.  Much of the argument in the 1990’s was about what was NOT on the list.  Critics argued that the list was made by old white guys and included almost exclusively other old dead white men from Europe and early America.  If the canon is supposed to include universal “truths”, why is there no diversity?  Are old dead white guys the only set of humans with access to universal principles?  Moreover, this criticism played well into the constant, whining question of students asking “What does this dusty old stuff have to do with me, why do I have to read this?”

The same sort of canonical process goes on in “classical” music, wherein the season long programs of professional orchestras are heavyly laden with the “standard” repertoire.  Every season includes Beethoven, Mozart, Haydn and Brahms.  Music Directors feel compelled to provide many of the same old warhorses year after year.  The repertoire is big enough so that every season isn’t a carbon copy of the last, but over time audiences have a lot of familiarity with the kinds of things included each year.  There is only a rare occasion that my local Detroit Symphony Orchestra plays something on a concert that I haven’t heard before.  Certainly one of the properties that makes something Good Music, and included in the repertoire, is that it is worth hearing more than once.  There is a depth to great music (and art and literature) that makes it worth hearing over and over, revealing new insights with repeated exposure.

As a composer, I also think the “standard” repertoire is killing orchestra music.  There are only so many concerts, so many of hours of music that are performed each year.  There is little room for new music.  Once or twice a season, a short work may be performed, and inevitably it is paired with something like Beethoven’s Fifth or another favorite that makes it worthwhile for the audience to suffer through the new work to get to the “good stuff”.  Because there is little opportunity for performance, few composers are interested in writing new orchestra music.  Many modern composers concentrate on chamber music to be performed by small groups, often groups they already know and by whom have a chance to have their compositions performed.  The orchestra repertoire has become a closed feedback loop, with orchestras playing works from the standard repertoire because that is what audiences are familiar with, and audiences being only familiar with those works because that is all the orchestra plays.

In the world of jazz music, a similar fight has gone on for years and created its own controversy.  At the center of the maelstrom is Wynton Marsalis, director of Jazz at Lincoln Center and world-famous trumpeter.  He has been an advocate for jazz music, and made great efforts to elevate the art of jazz to a cultural equal with any other art music in America.  He and critic Stanley Crouch have gone a long way to identifying a canon of jazz music and musicians that are essential.  They have run into the same controversies and problems in making a list of important stuff that every other list maker has run into.  The stuff on the list is never the real problem, it is the stuff that gets left off that creates a stir.  As historical advisors and contributors to the Ken Burns film “Jazz” for PBS, Marsalis and Crouch guided Burns to focus very heavily on Louis Armstrong and Duke Ellington in particular. Armstrong and Ellington are geniuses and no one can quibble about their importance, but other important figures got small amounts of screen time and some people’s favorites didn’t make the film at all.  Crouch and Marsalis don’t seem to think very much of so-called “avant garde” jazz music or jazz fusion as pioneered in the 1970’s, so those things didn’t fit their definition of “Jazz” for inclusion in the Burns film.  The same old problem of authority arose for Marsalis and Crouch as it did for those trying to create a canon of literature.  That problem being, who gets to decide what is important enough to be included on the list?  Who should have the power to determine what should be read or seen or listened to?

Duke Ellington, “It Don’t Mean A Thing, If It Ain’t Got That Swing”

My own humble view on the idea of any sort of canon of Western culture is this.  There is nothing included on any version of the Western Canon or standard repertoire that is unimportant.  They are all masterpieces and well worth anyone’s time to read or study.  Shakespeare for example, is very important and has much to offer all of us both as the historical figure showing us a vision of his own period, and as a universal poet that speaks to us with a contemporary voice.  The comedies of Shakespeare are all about love and the romantic loving relationships between people.  If you are a human being (of any gender or race) and have been in love or hope to be in love, there is something personally relevant for you in Shakespeare’s comedies.  The problem is to think that they are the ONLY important works.  There are plenty of things just as important that did not make the list, whatever version of whatever list you happen to be looking at. Socrates, Plato, Dante, Shakespeare, as well as Bach, Mozart, Beethoven, Brahms, Louis Armstrong and Duke Ellington are all valuable.  But they are only a beginning.

Benedict in Love, Much Ado About Nothing

One mistake is to think that the canon of Western culture holds the answers, some sort of universal set of truths.  It doesn’t, and in fact the so-called Great Books don’t even always agree with themselves.  If the answers, the truths, the solutions to the problem of the human condition were already written, the world would not be the troubled place it is today.  The value in studying great works in how it teaches us to think.  You don’t have to agree with Plato, Chaucer, Milton, Goethe, Tolstoy, Freud, Proust or Joyce, but the benefit is in arguing with them.  Reading their ideas and deciding for yourself if you agree or disagree and why.  Get angry with one of these writers and put together your thoughts on why their writing is a big pile of steaming crud.  The important thing is using your brain to formulate your position and rise to the challenge of the discourse.  Wrestling with masterpieces builds the skills to critically analyze the culture and institutions around us.  If you can argue with Plato, you can easily figure out why any political candidate is full of prunes.  You can be a thinking member of society and not be fooled or manipulated by forces around you.  A person doesn’t learn the answers from the canon, a person learns how to learn.  Education should not be exclusively vocational.

Ancient societies were unequal, and it is true especially of historical works that much of what has been preserved for us to read or hear was from old dead white guys.  There is nothing wrong with the works in the canon of Great Books or the standard repertoire of music.  The other mistake is to think that they are the only works possible to teach critical thinking and great ideas. There are plenty of writings and works of art from other cultures that could serve similar purposes.  The point is to engage the mind and develop the ability to be a thoughtful person.  History was unkind, however, and we are only passed down the works that had the opportunity to exist. Wolfgang Amadeus Mozart, for example, had a sister who was also a musical prodigy.  Maria Anna “Nannerl” Mozart went on some of the early tours of Europe that Leopold paraded his children on, and amazed audiences performing right alongside her younger brother.  She had the potential and skill to be as important a musician as her brother, but not the opportunity.  Her musical training and activities stopped when she was 18 years old, as she was no longer a novelty as a child and had no future of a musical career in 18th century Europe.  So we have no great symphonies composed by Maria Mozart, and we are poorer because of it.
My solution is straightforward.  Read everything.  Listen to everything.  Literature, music, art, theater, philosophy  and the like.  I agree with the philosopher John Searle, when he suggests that there shouldn’t be one fixed unchanging canon, but rather a “certain set of tentative judgments about what had importance and quality”, and that the list of what is part of the canon should be constantly revised, changed and expanded.  It is the process that is important,  not the final list.  By the way, I have a much bigger shelf than old Dr. Eliot, 🙂