The Barber of Seville and The Marriage of Figaro are two of the most performed and popular operas in the repertoire.  Persons of my generation are familiar with the music, if only from the cartoons of the esteemed one Bugs Bunny.

The Rabbit of Seville

In the world of opera and its audiences, the characters of Figaro, Susanna, Rosina, and Count Almaviva are very well known.  The plays of Pierre Beaumarchais have been set to music by several composers, and the operas of Rossini and Mozart are still in the top ten performed operas of every season even to this day.  Rossini set to music the play of Beaumarchais entitled “The Barber of Seville”, and it is a beloved masterpiece of the bel canto operatic style.  When Mozart and Lorenzo da Ponte collaborated to create “The Marriage of Figaro”, little did they know that they would create an opera that would be popular two hundred years after its premiere.

Pierre Beaumarchais actually wrote a trilogy of plays centering around the character of Figaro.  The third play is entitled “The Guilty Mother”, and has been set to music by Frenchman Darius Milhaud, and also plays a central role in American composer John Corigliano’s opera “The Ghosts of Versailles”.  Corigliano was commissioned in 1980 to create a new opera for the 100th anniversary of the Metropolitan Opera in New York city, his hometown.  The anniversary was celebrated in 1983, but work on the opera by Corigliano and the librettist William Hoffman stretched on for seven years, well past the initial deadline.  “The Ghosts of Versailles” was finally premiered in December of 1991. 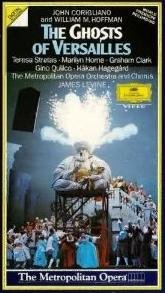 I am one of the world’s biggest fans of the music of John Corigliano.  His Symphony No. 1 was premiered in 1990, and the recording of that work has played on my CD player and digital music collection countless times since then.  It was already a piece I cherished in 1992 when “The Ghosts of Versailles” was broadcast on public television in America.  I parked myself in front of the television, and recorded the entire performance on my VCR to a VHS tape.  (Those readers under the age of 25 can google search what a VCR and VHS tape are.)

Sadly, I was an instrumental music student at the time of the premiere of Corigliano’s opera.  I loved the music for sure, but at the time was completely unfamiliar with the world of opera.  I didn’t know “The Barber of Seville” nor “The Marriage of Figaro”, much beyond the Bugs Bunny cartoons.  For the audience at the Met, there were beloved characters and familiar friends returning inside Corigliano’s works.  For myself, I surely missed much of the meaning in the dramatic I was enjoying.

Recently I have enveloped myself in the operas of Wolfgang Amadeus Mozart, and am much more familiar with “The Marriage of Figaro” than I have ever been in my life.  This has led me to enjoy the complete “Barber of Seville”, and also long to revisit “The Ghosts of Versailles” knowing that it was in part based on the third play of the Figaro trilogy.  Earlier in my music study, I had to face the sad fact that opera is expensive.  Recordings of complete operas were very expensive, and video productions even more so.  Language is a constant barrier for me, so librettos and translations are essential to my study, or at least videos with subtitles.  All of this was an obstacle to becoming familiar with even the standard repertoire of the opera house, let alone new works.

I am very happy to report that I have recently enjoyed the service at Metropolitan Opera on Demand.  This is a wonderful collection of operas in video and audio recordings available through the website of the Metropolitan Opera in New York City.  They graciously give a seven day free trial of the service, which is available for a monthly subscription or individual performances available for a one-time rental.  As you can imagine, the very first performance I enjoyed was “The Ghosts of Versailles” in the premiere run from over twenty years ago.
I am also happy to report that I am much more familiar with “The Barber of Seville” and “The Marriage of Figaro”  now than I was in 1992.  Beaumarchais “The Guilty Mother” appears as an opera within the opera during “The Ghosts of Versaille” and the quotes of music from Mozart are absolutely delightful.  I enjoyed the video on a much more substantial level now than I did originally, and both Hoffman and Corigliano are to be commended for their masterpiece.  The production is so elaborate that few opera companies have undertaken a production of the work since its initial run at the Metropolitan Opera.  I am happy to report that the work was given its West Coast premiere in 2015 by the Los Angeles Opera, and I truly wish that it receives more performances in the future.

6 thoughts on “The Ghosts of Versailles”