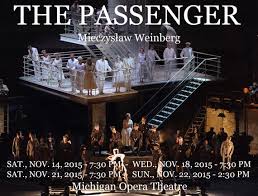 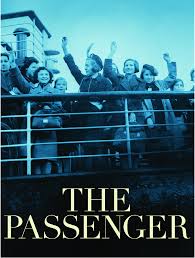 Something has really been bothering me recently.  I have a ticket to see the Michigan Opera Theatre put on a production of a modern opera, The Passenger, at the Detroit Opera House this month.  The composer of the opera is a man named Mieczysław Weinberg, and the thing that bothers me is that I didn’t recognize the name at all.  I am a pretty big fan of classical music, and very much a fan of twentieth century composers.  I listen to all sorts of stuff, from the works that get played in the concert hall to works that have few admirers.  Many composers in the 1900’s abandoned tonality, and the resulting body of atonal music can be dissonant and harsh sounding on first listen (and second, and third, etc).  There are quite a few things in my music collection that my wife, neighbors and house cat all prefer I listen to with earphones, rather than speakers.  (The dog, frankly, is oblivious to it all.)  My point here is that I have dug deep into the output of modern composers.  I don’t understand why I haven’t run into Mr. Weinberg’s works before, or at least encountered the name a few times.

Mieczysław Weinberg was born on December 8, 1919 in Warsaw, Poland.  His family was Jewish, his father working as a violinist, composer and conductor in Warsaw.  His mother was an actress in several Warsaw theater companies.  Mieczysław entered the Warsaw Conservatory at age 12, and graduated in 1939.  One doesn’t have to be a very big World War II history buff to imagine that being Jewish, in Poland, in 1939 is a particularly unfortunate combination.  Mieczysław escaped to the Soviet Union, but his parents and sister did not and eventually died in the Trawniki concentration camp.  Fleeing West to Russia may have been the only option at the time, but it turned out he left one bad situation for another in the Stalinist Soviet Union.

Weinberg moved to Minsk, and then in 1943 settled in Moscow, where he spent the rest of his life and career.  He was a friend and colleague of Shostakovich, and was haunted by similar oversight of the Stalin regime and the following decades of the Cold War.  The real reason Weinberg was “undiscovered” for so long in Europe and the United States is that his music never broke through the Iron Curtain.  While Shostakovich and Prokofiev were sometimes championed by the Soviet Government as examples of good (ie. superior) Russian culture, Weinberg was not truly Russian.  He was an émigré, spoke the Russian language with an accent, and would always be Polish and Jewish.  Mieczysław wrote 22 symphonies, 17 or 18 string quartets, seven operas, of which The Passenger is only the first, but they were never heard outside of Russia during his lifetime.

Another reason I didn’t immediately recognize Weinberg’s name, is that we have only in recent years decided how to spell it.  In the original Polish language of his birth, his name was spelled “Wajnberg”, but in the Russian Cyrillic alphabet it was apparently spelled “Вайнберг”, which is simply inscrutable to me.  When this Russian name was retransliterated back into the latin alphabet, it was variously spelled as “Vainberg” or “Vaynberg”.  The spelling “Weinberg” has become standard, but the entire issue is a giant pain in the caboose when you are trying to google search someone.

The Passenger was commissioned in the early 1960’s by the Bolshoi, and went into rehearsals in 1967 for a premier scheduled in 1968.  The Soviets prevented it from being performed.  As Alex Ross puts it, “Evidently, the opera’s emphasis on Polish and Jewish suffering, as opposed to the Russian struggle, made it undesirable.”  The work was finally heard by audience when it was premiered in a concert version in 2006, and only received its first operatic stage production in 2010 at the Bregenzer Festspiele in Austria.  Detroit will be only the third US city to mount a production of the work, which was done first in Houston and then in Chicago. 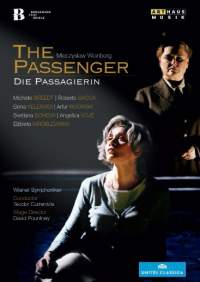 So many times, when one hears a piece of music that has been undiscovered for so long, you really can tell why it has remained “undiscovered”.  There is a DVD available of the Bregenzer Festspiele production, but I have not seen it yet.  I have listened to several hours of Weinberg’s symphonic music on Spotify, and have very much enjoyed it.  I think after seeing The Passenger, I will conclude that it had been unjustly neglected for so many years.  I can’t tell you how excited I am to find a huge body of work, from a top quality modern composer, that is all new to me!

6 thoughts on “The Mystery Man”