I have a large collection of music on Compact Disc.  I mean, really pretty big.  Between my books and CD’s, I don’t think I will ever move from this house.  It would be too much of a chore to pack this stuff up and cart it to a new location.  Even though I have added all this music to my digital music collection, I like my CD collection.  If some disgruntled computer hacker decided to make Apple Match the target of their destructive powers, my CD’s will still be safe in my hands.  If my desktop computer implodes and both external backup drives die some digitized ritual death at the same time, I still have the physical compact discs that the bulk of my collection came from.  I have not yet adjusted to the idea of a streaming music service.  My entire life, I have had the feeling of owning my own copy of an album, on vinyl, CD or whatever.  The idea of renting access to a collection, no matter how large, and having that access disappear when I stop paying is something to which I have yet to become accustomed.

The very first compact disc I owned (and still have) is the Wynton Marsalis album, Black Codes from the Underground.  Wynton had already made a huge splash on the music scene by winning Grammy Awards in both classical AND jazz categories in 1983 AND 1984.  Wynton was a young lion, and his early successes helped convince record companies that there was still a commercial audience for jazz recordings.  Black Codes from the Underground won the Grammy for Best Jazz Instrumental album, and also for Best Instrumental Jazz Solo for Wynton’s own playing.  Wynton was on a mission (and still is) to elevate jazz music, bring artistry and elegance to the bandstand, and show respect to the music and the masters who have gone before him.  His bands always wear suits on stage, and treat every performance like they are on the “altar of swing”.

This album features Wynton’s first working quintet as a leader.  Wynton plays trumpet, his brother Branford Marsalis plays soprano and tenor saxophone, Jeff “Tain” Watts is on drums, and Kenny Kirkland on piano.  Ron Carter plays bass on one track (“Aural Oasis”), and the rest of the album features Charnett Moffett on bass.  Looking back at the careers these men have had in jazz, you realize what an incredible collection of talent there is on this album.  The core of this group had played together on all four of Wynton’s albums as leader to this point, albums that had won Grammy Awards three years in a row.  Alas, it proved to be too much talent to contain for long.  After Black Codes was recorded, Branford Marsalis and Kenny Kirkland both left the group to pursue an opportunity touring with Sting.  It doesn’t take much imagination to envision that this was a bit painful for Wynton, but clearly his older brother Branford was not going to stay a sideman forever.  Branford has pursued his own path, and the Branford Marsalis Quartet has recorded some remarkable albums under his leadership.  Kenny Kirkland sadly had his career cut short when he died of congestive heart failure in 1998.  Jeff “Tain” Watts played on the next three albums with Wynton in a quartet setting, and has gone on to be one of the greatest drummers of his (or any) generation.  Black Codes from the Underground is a fantastic document of all of these musicians together in one place.

Many of the liner notes from Wynton’s albums were written by the author and music critic, Stanley Crouch.  The opening paragraph of the notes from Black Codes reads like this:

As the cover tells you, it all comes down to knowing and wanting to know, to study and experience, to rebellion against the bondage of ignorance. And no major art can subsist on luck or on natural talent that is never put to the head-slapping test of discipline. So there is never a point at which learning and knowing don’t come together for the best expression of talent. The objective is mastery, which is always born of sophistication. In jazz, mastery has to do with an unavoidable velocity because the improviser must work in a context where the moment is all. Where the recipe for shape, continuity, and form has to be conceived, mixed, cooked, and served immediately. As with all art, the more you know, the more you can do. And when everything is focused by integrity, you hear the emotion of idealism boiling over the top, spanning moods from the bristling to the frail tenderness of a vulnerable lover’s whisper. This recording has that scope of passion, and it is delivered with a gutbucket high-mindedness as intriguing as it is exciting, as infectious as it is soothing.

I never know what in the world Stanley Crouch is talking about.  I will give him respect for having a writing career much more successful than I ever will, but I can’t pretend to understand everything he is writing.  What I can say is that in the efforts to elevate the art of jazz, both Crouch and Marsalis have tried to define a jazz “canon”, a body of masterful works that should be studied and remembered.  By definition, this is a conservative process that will include some things and exclude others.  I would diplomatically state that Crouch and Marsalis did not think as highly of some of the avant-garde jazz of the late 1960’s, or the fusion based music of the 1970’s.  In spite of whatever criticism one may have for Wynton’s efforts to define what is important in jazz, he has done more over his career to garner support for the music and musicians (young and old) than anyone else I can think of.

Black Codes from the Underground has plenty of frenetic, post-bop rhythmic complexity in tunes like “Chambers of Tain”, “Delfeayo’s Dilemma”, and the title tune “Black Codes”.  I still appreciate those tracks all these years later, which is a mark of good music.  In listening to this album a few times preparing to write this post, I find I have a new favorite tune.  The clean, straightforward final track of the album, simply entitled “Blues”, seems to find a sweet spot in my ear.  I don’t know if it is the lazy, hot humid weather of late July in Detroit that makes this appeal to me, or if I am showing signs of “maturing”.  Smart bets are probably on the weather.

Wynton Marsalis, Black Codes from the Underground on Spotify 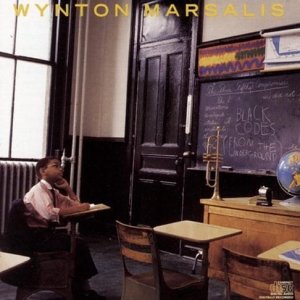 8 thoughts on “A Series of Firsts, Part IV”