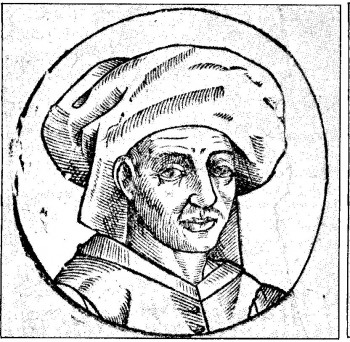 In this day and age, I am not convinced a composer can make a career out of simply composing music.  At least, not “classical” music in the western concert music tradition.  There are plenty of modern day composers, people of great talent and genius, but in general they must earn their living doing something additionally, besides composing.  Most teach, often at the university level, but all must do something to fill their belly with food and keep a roof over their head.  I think Samuel Barber may have been the last composer I am familiar with who could support himself on commissions and royalties alone, and even then, he had a pretty good head start in life coming from a family of modest privilege.

Alas, this is a series of articles of firsts rather than lasts, so the focus of my musings for this post will be the earliest composer who garnered fame and recognition in his own lifetime, Josquin des Prez.  Not a great deal of information is available on the early life of Josquin, his birthdate is approximately 1450 to 1455.  He earned enough attention during his life that his date of death was well recorded at August 27, 1521.  Josquin was a genius of counterpoint in the era of the Renaissance.  Howard M. Brown puts it very succinctly in his textbook, Music In The Renaissance,  “The High Renaissance was the age of Josquin.”  There are three main reasons this is the case.  First is the undeniable musical talent of the man.  There were earlier composers, and many contemporaries of Josquin who wrote music, but he clearly stood out as one of the greatest.  The second reason is the changing attitude of the Catholic church about religious music.  Renaissance theologians looked back at the writing of the ancient Greeks and Romans, and read about how the music of that time was thought be so expressive and emotionally moving.  The church began to allow composers to be more personally expressive in their music, and began to include music beyond just the Gregorian chants that had served the Mass and  Offices for hundreds of years.  This opened the door to musical creativity, and the personal talents of the composers of the day.

The last reason Josquin was able to be so well known during his lifetime is a technical one.  The invention of the printing press was a revolutionary step in the history of music.  Prior to the printing press, music had to be painstakingly copied out by hand, involving great amounts of time and expense.  Most of the time the church choir would crowd around one large book of music, shared by all the singers.  This worked in part because plainchant remained unchanged for centuries during the middle ages, and the vocalists were quite familiar with the material.  With the use of the printing press, the Renaissance choir had a form of mass media.  New music could be introduced, multiple copies distributed to the choir, and additional copies could travel to other monasteries and cathedrals.  Josquin’s compositions could spread to a larger geographical area, in a timely fashion, and with the music spread his reputation.

Josquin wrote secular music and motets, but the highest form of music composition in the Renaissance was certainly the Mass.  Josquin was a master of music to be sung in the Catholic Mass.  The religious ceremony that is the High Mass has many different elements, and those consist of the Propers and the Ordinaries.  The Propers are those things that change with the liturgical year, appropriate (or “proper”) for the season.  The Ordinaries are the constant, unchanging parts included in all High Masses.  A Renaissance composer like Josquin standardly set the Ordinaries to music, including the Kyrie, Gloria, Credo, Sanctus, Benedictus, and Agnus Dei.  This was a brilliant compositional choice, as the setting of the Latin texts of the Ordinaries are sung in every Mass, all year long.  Likewise, the music Josquin wrote for the Mass could be used repeatedly, at any time during the liturgical year.

Renaissance composers wrote masses using a number of approaches, and there are surviving examples from Josquin of each technique.  (There are also a number of spurious publications of the day attributed to Josquin, because of his fame, probably not actually written by Josquin.  The name Josquin would sell music for the publisher.)  Gregorian chant, which had represented the eternal voice of God for hundreds of years, did not disappear overnight.  Existing plainchant melodies served as a springboard for composing polyphonic Mass music for multiple voices.  One type of mass is the Cantus Firmus mass, where a Gregorian chant is included in its original form in one of the voices, and new melodies are sung in other voices to compliment the chant.  A second type of mass is the paraphrase mass, in which a plainchant melody in present in an ornamented and elaborated form, appearing in multiple voices.  Other types of masses include the imitation mass using secular musical materials, solmization masses which carved a melody using do-re-mi syllables, and canonic masses written with original melodies in strict canons.  The church allowed composers all of these freedoms to experiment and express themselves, at least until the church itself was shaken to its foundation by the Reformation.

One early paraphrase mass composed by Josquin is the famous Missa Ave Maris Stella.  It was composed around the year 1500 or so.  What we know for sure is that it was included in a book of masses published in 1505 by the Venetian publisher, Ottaviano Petrucci. The names of Renaissance masses were based on the plainchant or material used as a musical springboard.  In this case, Josquin wrote his mass (Missa) using the Gregorian chant Ave Maris Stella, which I included in the previous post.  If you missed it the first time around, here is the original chant.

What we have to remember as modern listeners is that the congregation of the day would have sung this chant their entire lives, as well as the generations of churchgoers before them.  It was extremely familiar to them.  Josquin includes all the notes of the original chant in his mass, but it is so decorated, ornamented and elaborated upon, it becomes almost a subliminal element of the music.  It is as if our little Stella has gone prancing around in the waters of an Italian fountain, singing her own little tune in the sunshine, to where even her mother is slow to recognize her.  This kind of creativity would not have been allowed in the medieval church, but during the Renaissance this level of personal expression was allowed in the service of God.  The creativity of Josquin des Prez was second to none, as his contemporary Martin Luther wrote “Josquin alone was master of the notes, which must do as he wishes; other composers do as the notes wish.”

I have to confess that I have a difficult time picking out the original plainchant by just listening to the music.  I had to study the score and find it woven in the fabric of counterpoint created by Josquin.  That is perfectly acceptable to Josquin and the church powers of the Renaissance, because the ancient chant IS in there and God realizes its presence.  In the following performance, the original Gregorian chant is sung first, and then the mass in its entirety.

I remember the first concert of Renaissance music I attended, a Collegium Musicum concert put on by early music enthusiasts at the university where I was taking classes.  I had been playing and listening to music my entire life, but was absolutely dumbfounded by the sounds I heard that day.  There were vocalists, and also an army of strange ancient instruments.  People on stage had lutes and theorbos, recorders of various sizes, sackbuts and cornettos, and some rudimentary percussion instruments.  As the group began to play, I honestly could not tell what sound was coming from which instrument!  There was complex modal counterpoint, but it sounded like “wrong” notes to my ears accustomed to major and minor scales.  I realized that day the truth in Hamlet’s quote to Horatio, “There are more things in heaven and earth, Horatio, Than are dreamt of in your philosophy” (in my case, philosophy of music).   Fortunately, the vocal mass setting of Josquin’s Missa Ave Maris Stella is much more accessible to my ears than that first exposure I had to Renaissance music.  If Josquin is your first exposure to Renaissance music, I hope you have found it as mind opening as I have.  With a little context, good music can be appreciated from many different cultures, as well as times in history.

9 thoughts on “A Series of Firsts, Part II”