Recently, the busy folks at Google made available an online tour of the famed Abbey Road Studios.  Anyone with internet access can go online and see inside the place where some of the most famous recordings were made.   The building at 3 Abbey Road, St John’s Wood, City of Westminster, London was originally a townhouse.  It was already 100 years old when it was converted into a recording studio by the Gramophone company in 1931.  The list of artists who have recorded at Abbey Road Studios is extremely long, but by far the most famous group to work there is the Beatles.

There is hardly a hearing person on the planet that needs any introduction to the Beatles.  If there were such a person, I can assure you that there are many more qualified than me to make such an introduction.  I beg the reader to have a touch of patience with me as I try to put together a few thoughts about one landmark album the Fab Four recorded at Abbey Road, namely, “Sgt. Pepper’s Lonely Hearts Club Band”.

In 1966, the Beatles retired from touring.  Their performances had become events of sheer pandemonium.  No one could hear the band over the screaming adulation of the fans.  The band couldn’t even hear themselves play.  Security guards had to keep overwhelmed groupies from running up on stage during performances.  Band members had to be escorted by guard both to and from performing venues.  The Beatles had grown weary of the spectacle, and were disappointed in their own musical performance under these circumstances.  The group had received death threats, caused controversy with their public statements, and barely escaped the Philippines after turning down a breakfast invitation from Imelda Marcos.  Public performance had taken a huge toll on the four men.  They decided to just not do it anymore. 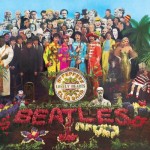 This turned the Beatles into a studio band, but not just any studio band.  They were still the Beatles.  There was a huge demand for their records and plenty of sales could be made if there was a product to put out.  They began working in the studio in sessions that would become the 1967 album, “Sgt. Pepper’s Lonely Hearts Club Band”.  This developed into a “concept” album, and represented a huge paradigm shift.  Previously, recordings were trying to preserve a performance, make a representation of  a live (or live-in-studio) musical event.  With this new album, the Beatles knew they were never going to play the music live.  With the cutting edge technology of Abbey Road Studios, they had at their disposal recording effects that were state of the art.  The album BECAME the performance, not just a preservation of a piece of art, but THE piece of art itself.  It existed only on the album, and was never sounded out live the way the recording sounded.

This is evident from the opening seconds of the first tune.  The listener hears audience noise and the tuning of orchestra string instruments, giving the impression of a noisy public space.  This is one of the great ironies of the “Sgt. Pepper” album.  The Beatles had given up live performance, but the concept of this album was one of a fictitious live performance of an alter ego, the Lonely Hearts Club Band.  The album was originally released in the UK without any pause between tracks, further reinforcing this aural impression.

The Beatles had an unlimited recording budget for this album.  It’s possible they could have recorded bodily functions and sold enough copies to make it a gold record.  But they wanted to make this one of the best albums ever, and spent a colossal 55 hours of studio time in open-ended sessions to record the tracks.  Over 700 hours of engineering time was spent on making the final mixes.  The Fab Four were experimenting, and had the money and pull to bring in whatever sounds they wanted for the album.  The George Harrison contribution, “Within You Without You”, is a good example.  There is George’s Sitar, a group of uncredited Indian musicians, a string section later overdubbed, a tambura, and probably more things I can’t begin to identify.

Within You Without You

One of the funniest stories about the recording sessions was an interaction between John Lennon and producer George Martin.  It actually may have started in the sessions for the previous album, 1966’s Revolver.  In previous times, musicians often had to record lead vocals twice, to create an enhanced and richer sound for the final product.  This was a tedious process for the vocalist to repeat their performance precisely.  During the “Sgt. Pepper” sessions, the Beatles had every effect available to them including something called automatic double tracking or ADT.  This process made re-recording the lead vocal unnecessary. It was during the Revolver sessions that Lennon had asked about the technology.  Martin fed him a line of prunes and told him his voice was “treated with a double vibrocated sploshing flange”.  Lennon realized he was being joked with, but always referred to the effect as “Flanging”.  As a testament to the influence of the Beatles, the term “Flanging” in universally accepted for this effect to this day.

The idea of an album as the main product was a shift in thinking in the music industry of the time.  In those days, singles were the lifeblood of the recording and radio industry.  The album’s production was taking so long that two songs that were originally intended for the album were released as singles.  This was in no small part to keep the Beatles somewhat in the public eye as they built this early concept album.  “Strawberry Fields Forever” and “Penny Lane” were both recorded in these sessions, and certainly are artistically consistent with the album.  These two songs were later included on the US release of the “Magical Mystery Tour” album, but not the British versions

The Sgt. Pepper album has been criticized for having tunes of varying quality, and it is true that the Fab Four spent more time on some of the first tunes recorded, and less on the later tunes as things began to get bogged down.   No matter what your final opinion of the finished product, the achievement is a milestone in the history of music.  As an early concept album, recorded with state of the art technology, the creative freedom, and budget that the Beatles’ fame empowered the project with, it remains a work not to be missed.  I’m not going to put a link to the entire album here.  I’m sure you can throw a pebble out your front door and hit a friend who has a copy, if it is not already in your music collection.