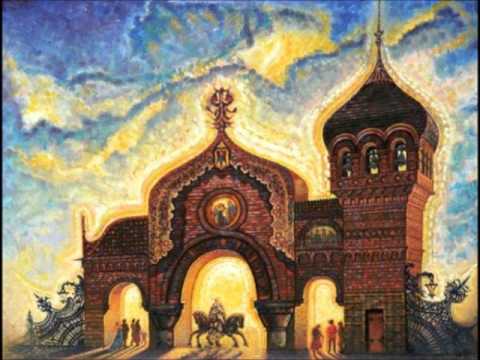 Modest Pyotrovich Mussorgsky (1839-1881) was a largely self-taught Russian composer.  His most famous work is likely the collection of piano pieces called “Pictures at an Exhibition”.  The world knows this piece in the original piano version, as well as a large number of versions for orchestra.  An abundance of very talented musicians have taken an interest in Mussorgsky’s piano piece, and each orchestrated it in their own way.  Listening to several versions is a fascinating way to study orchestration.

I had the good fortune of being in the audience for a performance of “Pictures” conducted by Leonard Slatkin.  Maestro Slatkin had an opportunity to talk to the audience, and described himself as having an “unhealthy obsessive relationship with the work”.  He has studied and compared many of the existing orchestra versions, and demonstrated a few passages in different forms for listeners that day.  Slatkin’s enthusiasm for the work is contagious.

“Pictures at an Exhibition” has a straightforward extramusical program.  Mussorgsky knew the Russian artist and architect Viktor Hartmann, and was shocked at Hartman’s  sudden death in 1873 of an aneurysm.  A large exhibition of Hartmann’s art was put on by friends and admirers after his passing.  Mussorgsky conjured up his piano pieces to somewhat recreate the experience of walking around the art exhibit.  There is a promenade, that recurs in various incarnations, which represents people walking between paintings.  At each stop there is a piano miniature representing a particular sketch or painting by the artist.  The music is very descriptive and pictorial, but unfortunately, not all the pieces of art that inspired Mussorgsky have survived.

Inspired by Maestro Slatkin’s obsession, I thought I might share the opening Promenade in the original piano version, as well as a few of the orchestral versions.  It should be noted that you might hear different notes as well as different instruments in each version.  Mussorgsky was a composer who wrote very much by instinct, and after his own death some well-meaning supporters have “corrected” some of his manuscripts.  Some musicians have orchestrated these altered versions, and some have had access to Mussorgsky’s original from which to work.

This is Mussorgsky’s original opening Promenade.

Pictures at an Exhibition, Promenade (piano)

By far the most famous orchestra version is by the great Maurice Ravel.  Ravel was a genius of writing for the orchestra, and over time his version of “Pictures” has become the most played and recorded.  As a trumpet player, I have a special fondness for Ravel’s version, as it opens with a solo trumpet line that all orchestra trumpet students have had to study.

Perhaps the earliest orchestra version was completed in 1896 by Mikhail Tushmalov.  It is so interesting to me to see how another person has listened to the piano version and imagined a completely different way to set it for orchestra.

Another fascinating  version to listen to is by the great Russian pianist and conductor, Vladimir Ashkenazy.  In 1983, he released an album where he played the piano version, and also conducted his own orchestra version of the piece.  No one can question the affinity and passion Ashkenazy has for the music of his homeland.  (This video goes a bit beyond the Promenade into the sections that follows.)

In some following posts I will provide some of the images that inspired Modest Mussorgsky, and compare the variety of ways they have been set for orchestra.  For now, here is a BBC special with Leonard Slatkin presenting and performing the music.  I hope you find his enthusiasm as infectious as I did.