I often think there should be some pause in the middle of a Bruckner symphony, to let the audience stand and move a bit.  Something similar to the seventh inning stretch in baseball, but without singing “Take Me Out To The Ballgame”.  The slow movement of Symphony No. 8 is a good example of why this is needed.  This is one of the longest slow movements in the entire orchestral repertoire.  The only thing that comes to  mind, that would compete with the girth of this Adagio, is the finale of Mahler’s Third Symphony.  A performance of the Bruckner Adagio usually lasts about 25 minutes.  For comparison, the entire Haydn “Surprise” Symphony No. 94 is only 25 minutes,and Beethoven’s Eighth or Mozart’s No. 40 are only a touch longer at 27 minutes each!

The vast expanses of Bruckner’s slow movements all follow a similar form, an overgrown ABABA arrangement of two contrasting sections of music.  The first section “A”is alternated with a second thematic “B” section, usually in a brighter tempo and new key.  In spite of its hefty size, the musical meaning of this movement reveals itself in the first minute and a half.  The “A” section starts out with a dark, chromatic melody in D flat that builds in intensity until measure 15, where a bright glowing A major triad bursts in at 1:16 in the recording below.  All of the dissonance and tension is gloriously released with this sudden appearance of a shiny triad with its third in the bass.  This A major chord is arpeggiated and hovered on for a good 15 seconds.  This musical gesture from darkness, to clarity and light, is repeated on a variety of levels throughout the movement, with increasing contrast and tension.

The first “B” section of music comes in at bar 47, 4:28 in the video.  It is a bit more flowing, and starts in the glowing brightness of E major.  The key of E major was first introduced as our shining ray of light in the Trio section of the second movement, and its reappearance here helps form another connection between movements.  The rich sonorous cellos play the main melody of this “B” section, teamed up with the violas and a violin countermelody the second time through.

An unexpected thing happens in the middle of all this lush, flowing, expressive string melody.  The momentum sort of comes to a stop, and a new idea interrupts briefly.  This new musical idea is a brass chorale sounded out by a group of Wagner tubas.  These brass instruments are probably poorly named as a sort of “tuba” as they are really more of a modification of a horn.  The sound is something between a French horn and trombone, and the instrument uses a conical mouthpiece  similar to a French horn.  It is normally the horn players of the orchestra that double on the Wagner tubas, sometimes called Wagner horns or Bayreuth tubas.  Richard Wagner had the first ones built for use in his Ring cycle of operas (Der Ring des Nibelungen), and a few other composers have used them since.

This chorale happens at bar 67, exactly the 6:00 mark in the video.  The string melody returns shortly with the full orchestra playing loudly.  This “B” section winds down and transitions back to a return of the “A” section music at bar 95, the 8:09 mark in our performance.  This time around the “A” section reaches a bigger, louder, more vehement high point.  It eventually winds down and softens to a return of the “B” section music at bar 141 (11:47 in the video).  This time the “B” section is set in the key of E flat, down a half step from its original appearance of E major.  E flat is significant because it is the relative major key to c minor, which is the main key of the other three movements of the symphony.  All of the motivic, rhythmic and key center connections help hold this giant multi-movement work together as one organic whole. 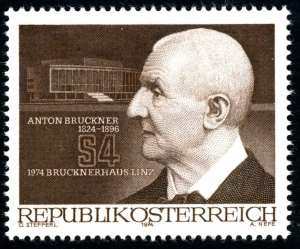 The “A” section music returns at bar 185 (15:09), embellished with a moving figure in the violas.  The musical idea of the “A” theme dominates the final ten minutes of the movement, and it winds and modulates through several keys, finally ending up in D flat where it started.  Once you can recognize the two main melodies of the movement (A and B), you can immediately know where you are in the form, in spite of its length.  If you are following along with a score, I will warn you that this final “A” section is one of the places that underwent the most revision.  If your recording isn’t exactly following the music you have in hand, you are using two different versions.

In many Romantic era symphonies, the middle movements are shorter and lighter than the outer movements (take the Brahms symphonies as an example).  Bruckner gives us middle movements that have all the weight and drama of the opening and the finale.  The Adagio of the Eighth is the longest movement of the work, usually 2-3 minutes longer in performance than the final movement.  In the words of Benjamin Korstvedt, “The Adagio of the Eighth apotheosizes the genre.”  After the three and four hour music dramas by Wagner in the opera house, I suppose a symphony that lasts an hour and twenty minutes doesn’t seem like too much.  Still, don’t leave home without your attention span, as every Bruckner symphony is a long ride.

Up next, the fourth movement Finale, which Bruckner labored so hard over.

2 thoughts on “From Darkness Into the Light”