The brown coat of a man brushes past audience members as he moves toward the stage.  What is going on?  This is an orchestra concert, and there is no mosh pit!  Why is this guy out of his seat?  “Ode to Joy” resounds in the finale of Beethoven’s Ninth, and this renegade is now on stage waving his arms in the middle of the action.  His smile stretches from ear to ear as he is pushing for the orchestra to go faster, play louder, his arms flapping, hair flying, a bewildered and abused conductor trying to go on.  The man’s euphoria is exactly in line with the spirit of the music, and by heaven, he is right.  It needs more sound, more speed, more intensity, and more JOY!  YESSSS!!!!! 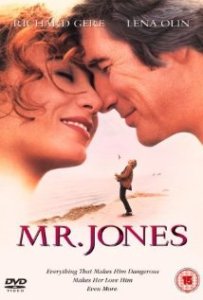 Although I’ve often felt like that in an orchestra concert, it’s actually a scene from the 1993 Richard Gere movie “Mr. Jones”.  At that moment, he is my hero.  I mean no disrespect  to anyone suffering from bipolar disorder, but part of the point of the movie is how charismatic and irresistible the character is in his manic episodes.  One is supposed to sit quietly in a symphony performance, but the music is often overflowing with deep human emotion.  Passion, grieving, joy, dance, love, despair, angst, celebration ….  you name it and it can be found in an orchestra concert.  I shouldn’t be expected to sit still for all of that. 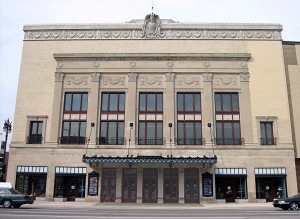 I had a break in my busy work schedule, and decided to make a point of attending a concert of my hometown orchestra, the Detroit Symphony Orchestra.  It’s been a long time since I attended one of their performances, too long in fact.  There is something about a live performance of music that just cannot be captured in a recording.  The DSO plays in a wonderful historic auditorium, Orchestra Hall,  which was designed by C. Howard Crane. It has the most wonderful acoustics.  I have sat in almost every section of seats over the years, and can personally bear witness that the music sounds great from every seat in the house.  The DSO first performed in  Orchestra Hall in 1919.  The hall closed in 1939 due to depression era economics, was sold and reopened in 1941 as Paradise Hall.  In the ten years it was Paradise Hall, the venue hosted some of the greatest jazz performers of all time.  Sadly it closed again in 1951, and had to undergo extensive restoration before it was home to the Detroit Symphony Orchestra again in 1989. Since 2003, it has been the anchor of the expanded Max M. Fischer Music Center.  I have been fortunate to hear the DSO play there almost my entire adult life. 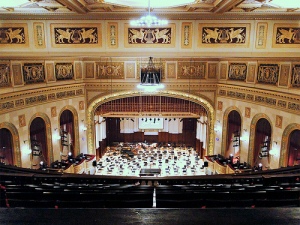 To attend a Sunday afternoon concert, I parked in the nearby parking structure, and entered the front doors of Orchestra Hall.  It is a beautiful building, with the inside containing lots of dark stained wood, and the stage surrounded by ornate gilded decoration.  I have been coming here for so long, it is very comfortable for me.  I have no need for the usher to show me to my seat, I know my way.  I am familiar with the restrooms, the bar on the landing of the second floor, the pictures of the music directors from past years, and the view overlooking Woodward Avenue from the third floor window.

Music is one place I feel quite at home, and I often forget how the formality of the hall can be intimidating to some.  Lots of people dress up to attend, but lately, I am of the thought that it is more important to be comfortable.  I want to think more about the orchestra than about how tight the knot on my tie is.  One of the things I would love to accomplish with this blog is to demystify classical music a bit, and make it more accessible to a larger group of people.  This is just MUSIC, and all that matters is that you have ears, not what shoes you are wearing.  I think if we all thought of Beethoven as a grumpy, messy bachelor with a poor love life and worse digestion, rather than the marble bust in the corner, we could begin to feel like we can connect with his music more.  It does us no good to put these figures up on  pedestals where no one can reach.

The program for my Sunday afternoon concert was:

This is an example of orchestra concert programming the way bacon, eggs and toast is a classic example of breakfast.  An overture (of sorts), followed by a concerto, and a symphony.  The shortest work, the 10-12 minute overture, leaves a natural break for the ushers to seat any latecomers in between the overture and the concerto.  The featured soloist then plays with the orchestra in the concerto, and can take a number of bows and play an encore before intermission.  The second half of the concert is taken up by the large multi-movement symphony.  I have attended dozens of concerts programmed in this sort of format.

As a composer, another detail of this program sticks out to me.  The opening work is by Toshio Hosokawa, an actual living composer.  One of the few ways a music director will program a contemporary composition is to pair it on the program with a well known warhorse like the Berlioz Symphonie fantastique.  I may have been one of only a handful of people that had heard the Hosokawa piece before the concert.  The music director is playing this first, and gambling that the audience will stay for the Berlioz.  Rarely would the contemporary work be played after intermission, for fear of losing some of the people in attendance.  Sad to me, but true.

It is an ironic situation, because Blossoming II is the easiest piece of the entire concert to understand.  It is a poetic, atmospheric, mood driven piece of music.  It is a meditative experience with shimmering soundscapes.  You are truly meant to sit back and let it wash over you.  All you have to be is a human being with ears, and you are in.  So much of Western/classical/art music is about complexity, form and architecture, but Hosokawa is creating an environment of sound for us to inhabit.  All you are required to do is listen.

I honestly have little idea how the Bartok Piano Concerto No. 3 sounds to everyone else.  I know Bartok’s music very well, and identify with a great deal of it.  This is a very familiar work to me, more so than for the rest of the audience.   The slow middle movement is my favorite, the solemn and meditative Adagio Religioso.  The center section of the Adagio has some of the evocative “night music” sounds Bartok is so very good at.  The concerto was one of the last pieces Bela Bartok wrote, in fact it wasn’t quite finished at his death.  The orchestration of the last few measures were completed by someone else, using Bartok’s notes.  In the music of his last couple of years, Barok didn’t always use the harsh dissonance found in some of his earlier music.  He was an accomplished pianist himself, and was writing this concerto as a surprise birthday present for his second wife.

My “Mr. Jones” moment came in the finale of the Berlioz Symphonie fantastique.  Anyone who has trudged around with the Grout music history textbook knows that this piece by Hector is the quintessential example of a program symphony.  A programmatic music has some sort of extra-musical narrative, a story or scene outside the music, which the work is trying to portray.  This one is subtitled “An Episode in the Life of an Artist, in five parts”, and the story line is one of a creative artist who has taken opium in the depths of despair over a hopeless love.  Berlioz provided program notes for the audience describing each movement.

The finale is a dream of a witches’ sabbath, with the sounds of all sorts of ghoulish creatures dancing a mad dance.  The beloved Idee Fixe melody that has represented the focus of the artist’s love is present, but now distorted.  All of these monsters have gathered for the artist’s own funeral, and the Dies Irae (Day of Wrath) hymn melody is shouted out first by the trombones. This all culminates in a loud ending that deserves a mosh pit, a raucous musical moment that has enthralled me since my first listen.  I was enthralled by the music again, and tempted to rush on stage to lend my assistance.  It was at this point that I had to recall that the next scene of the Richard Gere movie has his character strapped to a hospital bed, surrounded by burly orderlies, and being sedated before admission to the in-patient mental health facility.  I elected to let the conductor on hand complete his job without my help, but one day I promise I will have to show them how it is to be done.

5 thoughts on “A Trip To The Symphony”