A Nocturne (in music) is a short composition that evokes moods inspired by the night.  They are character pieces, not of any specific musical form.  The first use of the term Nocturne was by the Irish pianist and composer, John Field ( Éire go Brách!).  Some of the most famous Nocturnes for piano are by Frederic Chopin.  An album of Nocturnes by Yusef Lateef is what I want to share with you now.  This music has fascinated me for many years. 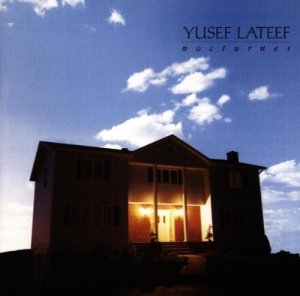 Yusef Lateef started his musical career as a jazz saxophonist and multi-instrumentalist.  He was born in Tennessee, but raised in Detroit, Michigan.  He adopted the name Yusef Lateef after his conversion to Islam in 1950, and he remained a highly spiritual man his whole life.  His musical mind evolved as he absorbed the music of many different cultures.  His music became hard to classify, which is a big compliment in this case.  He actually won a Grammy Award in 1987 for Best New Age Album.  Lateef wrote books, founded a music publishing company and a record label.  In one of his obituaries, it was written that “he played world music before world music had a name”.  I would say he created Good Music, of high Quality, whereby a myriad of influences went in, germinated, and came out pure Yusef.

A friend in college introduced me to the 1989 Nocturnes album.  It still intrigues me as atmospheric and evocative music.  The four musicians on the album create nighttime moods that ruminate, meditate and contemplate.  This is the night music of a clear night sky, where you can see out into the stars and heavens and feel small in the universe.  My natural inclination to analyze, deduce, and figure out the working parts of the music is wasted here.

This is one of those cases when writing about music is a little like dancing about architecture.  Yusef Lateef himself offered descriptive comments on the music in the form of a poem.  You can see the titles of each of the tracks in capital letters inside the poetic verse he provides.

I have to say, in my youth, music like this was the most difficult for me to compose.  I was always analyzing as I went along, justifying each bar and every note to my teacher, even when he wasn’t asking.  This came in part from my own insecurities, and in part from how I was learning about music.  I spent so much time analyzing, tearing apart music I liked to see how it was built, that I was doing the same as I tried to write my own.  What Yusef has done here is so much more sophisticated.  He has internalized his influences, turned off that analytical left-brain noise, and simply made music.  Straight up personal expression of his images of the night.

There are modes and pentatonic scales in use, but not in such a way that is completely attributable to a specific culture.  The same sounds may be used in Eastern European folk music, Asian music, Arab music, or Indian music.  Here they are not evoking a particular culture, but rather a larger “music of the spheres”.  It explores a heavenly outer space as well as a spiritual inner space.

I would humbly suggest picking a clear night to sit out on a porch and listen to this music while gazing into the night sky.  At the very least, find a quiet dark space to play the album.  Don’t try to read or drive or wash dishes at the same time.  Just sit and listen.  I think that is when this Good Music is at its best.

2 thoughts on “Music of the Night”