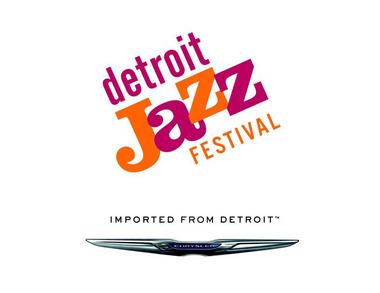 Sunday’s festivities were hot, hot, hot at the Jazz Fest, and I’m not just talking about the humid 85 degrees the weather gave us.  I rolled into the Chase Main Stage at Cadillac Square to catch the last half of the set by the USAF Airman of Note Big Band.  This is a traveling group that represents the United States Air Force around the world.  Usually I find the military musicians very good, skilled, precise and sometimes a bit stiff.  Swing and military formation don’t always go together.  These cats, however, put together a very, very good set.  The two tenor saxophone soloist in particular stood out to my ear.  One of the tenors apparently had a long stint with the Count Basie Big Band before joining the USAF group.  All of the arrangements I heard were penned by members of the band, which further adds to the street cred of this group.  They are the real deal.

Next, was a small ensemble, lead by this year’s Artist in Residence,  Joshua Redman.  This was the second of three sets that Joshua would be playing this weekend.  The members of the rhythm section in the group are Aaron Goldberg, Reuben Rogers and Gregory Hutchinson, and they played a good deal of material from the quartet’s 2013 album Walking Shadows.  As I wrote in an earlier post,  I was not previously familiar with a lot of Mr. Redman’s music.  Now that I have heard two sets of his music, I have no doubt in my mind how he has earned his reputation as a world class musician.  His compositions are well crafted, and his solos are very thoughtful, deep, and carefully constructed.  The word that keeps coming to my mind is cerebral, at times, almost too much so.  (I know my friends are falling out of their chair at the idea I am finding something too “cerebral”).  I guess I like my jazz to have a touch of grease on it every once in a while.

Grease, soul, blues and that funky New Orleans sound were in no short supply for the Dirty Dozen Brass Band that took the stage following the quartet.  If your legs aren’t moving and your butt’s not shaking when you listen to this band, you should go directly to the hospital.  You may be dead.  These guys make me want to book a trip to the French Quarter right now, get a Hurricane in a go cup at Pat O’Briens and then make myself at home on Rue Bourbon.  Here is a video from the 2013 New Orleans Jazz and Heritage Festival, for those of you that have never had the experience.  Enjoy!