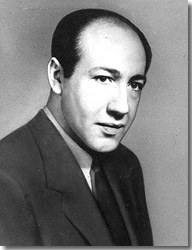 I trust everyone still has all their fingers after a holiday weekend filled with fireworks and fun.  The weekend may be over, but our month-long exploration of orchestra music from American composers will continue until the end of July.  Today’s offering is the Symphony No. 1 by David Diamond (1915-2005), completed in 1940.

Diamond is one of a generation of American composers who had success writing symphonies in the 1930’s, 40’s,  and early 50’s.  His music is melodic, tonal and well crafted.  Like many of that generation of symphonists, his music was mostly overlooked in the 1960’s and 70’s, as music in a lyric-tonal-romantic style fell out of fashion in favor of serial-atonal-experimental works.  Diamond always stayed true to his romantic musical voice.  In his words:

“It is my strong feeling that a romantically inspired contemporary music…..is the way out of the present period of creative chaos… To me, the romantic spirit in music is important because it is timeless.”

I can still remember the first time I heard the music of David Diamond.  In 1990, I had never heard of him when I bought a CD of his Symphony No. 1 by the Seattle Symphony with Gerard Schwarz conducting.  Buying the CD was pretty much the only way to hear underperformed, new or otherwise rare music in 1990.  There was not yet anything like Spotify, Pandora, IHeart Radio, or Rhapsody.  Most people used dial-up internet connections.  I don’t think you could download music from iTunes or Amazon at that time, so for me to try something out, I had to take a chance and buy it.

I bought the album and went home to listen to the music I had hunted and gathered.  The opening of the first movement hit me like a laser beam!   The first note rings on the long, tubular orchestra bells (it’s an E, but those of you with perfect pitch already heard that).  The upward three note motive that follows outlines an E minor triad.  It repeats, then repeats with additional notes, eventually blossoming into a whole introductory theme.  The music is filled with energy and rhythmic motion that simmers even through the quieter parts of the movement.  The sonata-form movement progresses with great craft and economy of material, ending perfectly with the bassoons proudly stating the three note motive and the basses and tubular bells playing that same E on which we started.  I must have listened to that first movement ten times in a row that first day I owned the album.

The second movement is a lyrical, song-form movement with long flowing melodies.  Our three note motive is present, now in a g minor version.  This wonderfully melodic and emotional music is just the sort of thing in which the serialists had no interest.  (On a side note, my wife is one who is very glad this atonal “phase” of contemporary music seems to be coming to a close.  Excessive dissonance is not her cup of tea.)

After the slow movement, Diamond skips the usual scherzo movement of the classic symphonic cycle and goes directly to the finale.  The finale is full of wonderful music, and further puts the three note motive to work, but it is the ending that really knocks my socks off.  In the closing, Diamond brings back the material from the introduction to the FIRST movement to bring the whole symphony to a close.  This music returns to us like an old friend, whom we first from heard twenty minutes ago at the beginning of the whole work, and gives the piece the big finish it deserves.

I think this is a just fantastic piece of music, and have studied the score many times.  It is a tightly constructed symphonic work, that manages to give us both motivic development AND long lyrical lines, and still sounds contemporary.  David Diamond wrote eleven symphonies, ten string quartets, ten concerto (I think), as well as a variety of other works that are all wonderfully listenable.  The Seattle Symphony recorded a series of albums of his work, which are currently available on the Naxos label.  Being so moved by just this one piece by an American composer makes me wonder why our concert programs are still filled with so much music by old dead German dudes.  (Alas, that topic would be an entire rant of it’s own.)