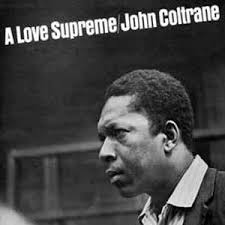 BBC Radio has a long running program called Desert Island Discs.  It is an interview program that invites a public figure to name eight recordings they could not live without.  The guests are supposed to imagine themselves stranded on a desert island and choose eight pieces of music they would want with them.  They get to pick a favorite book and one luxury item to have as well.  These choices enlighten the audience to some personal insights about the guest.  It makes for an interesting dinner party game and can lead to some fascinating discussions.

I already wrote about one of the recordings I would have to pick.  Kind of Blue by Miles Davis is an easy pick to guess for anyone who knows me.  The earlier blog post about Kind of Blue can be read here.  Another clear choice for me is the famous 1965 album from the John Coltrane Quartet, A Love Supreme.  I have owned this recording on vinyl LP, on compact disc, on my iPod and in the special two disc Deluxe Edition released in 2002.

On this record, we hear some of the greatest work by the “classic” Coltrane quartet:  McCoy Tyner on piano, Elvin Jones on drums, Jimmy Garrison on bass and Coltrane playing tenor saxophone.   By the time of this recording, they had been playing something like 300 dates a year together for about 3 years.  They improvised freely like they could read each others’ musical minds. The albums they created are required listening for any fan of Jazz.

This album was a very spiritual work for Coltrane.  His struggles over the years with drug and alcohol addiction have been written about many times, and he credited a loving, merciful God with giving him the strength to continue to fight those addictions.  A Love Supreme is a declaration of faith from Coltrane, and also some of the best music ever recorded.  NPR has an article on their site telling some of the story of the recording.

The Story of “A Love Supreme”

I have listened to this album hundreds of times.  I can hear the whole thing in my head without the album even playing.  I have studied it, transcribed it, stumbled through sad attempts to play along with it, and I never get tired of it.  It wasn’t until I owned the 2002 Deluxe Edition that I realized Coltrane had written a poem for this music.  The liner notes for this 2002 release include the complete text of the poem, and can be read here.

Liner notes to “A Love Supreme”

The suite has four parts: “Acknowledgement”, “Resolution”, “Pursuance” and “Psalm”.  It is the final part, “Psalm”, that Trane is intoning the poem in his saxophone melody.  If you follow along with Trane, he is playing the poem and the words fit his phrasing exactly.  He is clearly reciting the poem in his head and playing melody to go with it.  Imagine my experience in discovering this for the first time.  I had listened to this record for a dozen years and didn’t imagine there was anything I didn’t know about it.  Then this poem opens up a whole new layer of meaning and insight.

Here is that fourth part of the album, “Psalm”, with the words by Coltrane.

That is one of the things about good music, it keeps revealing new things upon repeated listening.  It “wears” well, and that is why I will keep on listening to A Love Supreme.  So that’s two albums for me, I get to take 6 more to the island.  What would be on your list of Desert Island Discs?

6 thoughts on “Another Desert Island Disc”