The Bad Plus is a band that is impossible to classify.  The group is often called an “avant-garde jazz trio”, which tells me less than nothing.  I don’t think of their music as Jazz, at least not the straight-ahead jazz that dominates my music collection.  That probably tells you more about me than it does about The Bad Plus, specifically that I have a rather conservative use of the label “Jazz”.  Whatever you want to call this group, I am tremendously fascinated by their music. 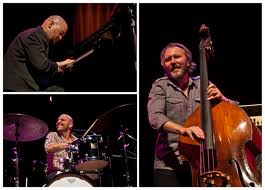 The trio is made up of Reid Anderson on acoustic bass, David King on drums and Ethan Iverson on acoustic piano.  This is the instrumentation of a standard jazz trio, and the group plays in jazz clubs and festivals around the country.  Their music is largely improvisatory and they usually play original compositions.  These cats are original, unique and very, very intelligent.  They clearly have listened and absorbed a ton of music, including jazz, modern classical music and rock.  Some of their most accessible tunes are versions of songs originally recorded by rock groups.  They have done music by Nirvana, Pink Floyd, Black Sabbath, David Bowie, Rush and many others.  The Bad Plus have been performing and recording together for 14 years, releasing 9 or 10 albums at this point.  The latest project from the trio is a version of The Rite of Spring, Stravinsky’s masterpiece explored on this blog in earlier posts (which can be read here).

Much of the music these guys put out is rhythmically driving, complex, intense and often LOUD.  I frequently think that Iverson (on piano) must have three hands with six fingers each to play all those notes.  There is an unspoken communication that happens between the three players that only occurs with great musicians that have played together a long time.  They will take their musical material, dice it up and deconstruct it in a musical blender almost to the point of stormy chaos, then bring the listener back to safer ground.  To illustrate, here is a version they did of Smells Like Teen Spirit.

From the same album called These are the Vistas, here is a tune entitled 1972 Bronze Medalist.

Rounding out our video lineup is a live performance from 2010 of a composition called My Friend Metatron.  The benefit of a live video is that you can verify that Ethan Iverson does actually play the piano with only two hands. (Which you can see when the lady in the grey sweater standing in front gets out of the way.)

So whatever you want to call The Bad Plus, I call it really Good Music!

One thought on “So Bad It’s Good”