In the wee hours of the morning on April 15th, the full moon will undergo a lunar eclipse that casts a red-orange glow over the moon.  It seems ominous to have this “Blood Moon” on the same day as tax day here in the good old USA.  I can think of no better way to ward off any bad moon juju than to play some loud music by the blues legend Howlin’ Wolf. 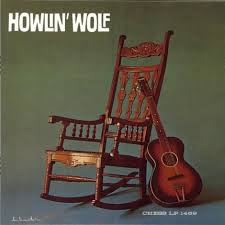 Chester Arthur Burnett was nicknamed Howlin’ Wolf, and was a star for Chess Records and the Chicago electric blues scene of the 1950’s and 60’s.  Both his first album (Moanin’ in the Moonlight) and second album (Howlin’ Wolf) were collections of previously released singles for Chess Records.  Everyone knows his second album as the Rocking Chair Album from the picture of an acoustic guitar leaning against a rocking chair on the album cover.  I always thought this was a silly picture for two reasons.  The first reason is that Wolf sang, played harmonica and ELECTRIC guitar on the album, not acoustic guitar.  The second reason is I think Wolf would have crushed that chair.  He was a hulk of a man at 6 foot 3 inches and just under 300 lbs.  He made a guitar look like a ukulele when he held one.

Howlin’ Wolf sang with a distinctive voice that sounded like a rusty chainsaw, only not as tender.  It was raw, guttural, powerful and strained which lent an authentic emotional desperation to many of the blues he sang.  I wish Tom Waits had recorded music near the same time as Wolf.  Tom Waits has a voice described by a critic as sounding “like it was soaked in a vat of bourbon, left hanging in the smokehouse for a few months, and then taken outside and run over with a car”.  Waits is definitely a graduate of the Chester Burnett School of Vocal Performance.  I would have dug a record with the two of them singing together.

Here is one of my favorites, “Wang Dang Doodle“

Most of the songs on the Rocking Chair Album were written by Willie Dixon, who also played bass on many of the tracks.  These songs were a huge influence on rock bands of the sixties, and have been covered by Cream, the Doors, the Rolling Stones, Led Zeppelin and many more.

“Howlin’ for my Baby”

It’s also notable on tax day that Burnett was one of the more savvy businessmen of the music world.  He managed his money well, and didn’t drink, smoke or gamble it away like so many did.  He was able to pay his band members well, and in so doing was able to surround himself with some of the best musicians available.

The lunar eclipse that gives us the Blood Moon happens about 3:30 am.  I suggest that we should all let out a cathartic howl at the moon and play some Howlin’ Wolf as loud as our speakers allow.  (Disclaimer:  This blog will not hold up as evidence in any legal proceedings involving excessive noise complaints from neighbors or mental health hearings about howling in the moonlight.)

2 thoughts on “Howlin’ at the Blood Moon”