Trombone players never get enough respect.  That is sadly, an unfair and unjust fact of life.  Among (male) musicians, trumpet players get the glory, saxophone and guitar players get the girls, and trombone players are the designated drivers.  Take the Marsalis family as an example.  Wynton Marsalis (trumpet) and Branford Marsalis (saxophone) have been fixtures on the national jazz scene for 30 years now and have recorded dozens of albums with their respective groups.  Each have won multiple Grammy awards.  Delfeayo Marsalis (trombone) is also an incredibly gifted player, but has recorded few albums, and gets called more frequently for work as a producer of jazz recordings.  The trombone player of the family doesn’t get the same respect.  When someone wants to get together a big band, all of a sudden you want 3 or 4 good bone players.  They just rarely get the opportunity to lead their own group and record. 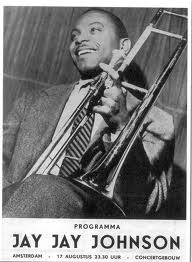 So let’s pay some respect to one of the great musicians and trombone players in the world of jazz.  J. J. Johnson was a great trombonist, composer and arranger.  He was a pioneer of playing bebop on the trombone, and a fantastic soloist.  He deserved and got the opportunity to record over 40 albums as a leader or co-leader, and many more as a sideman with some of the best jazz legends that ever lived.  One of my favorite albums is the 1961 release on Columbia entitled J.J. Inc.

I have to make a confession here.  I ran across this album for the first time because I was looking at recordings on which Freddie Hubbard played trumpet.  Freddie is stellar as always on this album, as is Cedar Walton on piano.  But this recording date is led by J.J. Johnson, the conception is his, and the compositions are his. Some of the best trombone playing on any record is here by J.J.  This record is every bit as good as anything Blue Note or Columbia put out in the sixties.   I shouldn’t have backed into it looking for one of my favorite trumpet players, I should have already known it.

Here is the track “Mohawk”, an original composition that really grooves!

Another favorite track from the album is “Fatback”, a jazz blues that features a great solo by Johnson.

Plain and simple it is difficult to play any instrument this well, but very, very difficult to play the slide trombone like this.  J. J. also recorded a few albums as a quartet, meaning just rhythm section and his trombone.  He was the only horn soloist, which is a huge load for any brass player.  No doubt, J.J had chops to spare.  Any fan should seek out these recordings.  No bones about it!

One thought on “No Bones About It!”