When you pick up your smartphone and Google the definition of “symphony”, you will see this:

An elaborate musical composition for full orchestra, typically in four movements, at least one of which is in sonata form.

At the conveniently named website Dictionary.com, you could find this definition for “symphony”

Merriam-Webster offers up this definition:

A long piece of music that is usually in four large, separate sections and that is performed by an orchestra.

The two necessary skills for an audience during an orchestra concert are, the knowledge to wait until after the last movement of a symphony to begin your applause, and the ability to turn off that smartphone so the darn thing doesn’t ring in the middle of the performance.  The four movement “sonata-cycle” (with an opening sonata-form, a slow movement, a dance-like movement, and finale), has been the “normal” convention since the time of Haydn.  Birds fly, fish swim and symphonies are big works in four movements.  Like a child’s parental upbringing, this symphonic convention is something that composers worked with, enhanced, expanded, rebelled against, loved or hated, but could not ignore.  When the late romantic composers Franz Liszt and Richard Strauss wanted to approach orchestral writing with a newer literary inspiration, they called the works “tone poems” or “symphonic poems”.  What they were composing was wonderful music, but could no longer be considered a “symphony”.

With this definition in mind, you can imagine my curiosity as a student, when scouring through the works of my favorite composer Samuel Barber, I find that his Symphony No.1 is in one movement!?!?  Barber had more musicality in his little finger than you would find if you cloned six versions of me.  What is a symphony in only ONE movement?  What could make it a “symphony” and not a “tone poem” or something else?  Where is the sonata form?  How could he give us a slow movement and a dance-like Scherzo in triple meter, all in one movement?  Fortunately, Sam provided a bit of a description of his Opus 9 first Symphony at the time of the premiere. (I have included this quote once before on Good Music Speaks.) Here is Barber’s own description, quoted from his biography “Samuel Barber, The Composer and His Music” by Barbara Heyman:

“The form of my Symphony in One Movement is a synthetic treatment of the four-movement classical symphony. It is based on three themes of the initial Allegro non troppo, which retain throughout the work their fundamental character. The Allegro ma non troppo opens with the usual exposition of a main theme, a more lyrical second theme, and a closing theme. After a brief development of the three themes, instead of the customary recapitulation, the first theme in diminution forms the basis of a scherzo section (vivace). The second theme (oboe over muted strings) then appears in augmentation, in an extended Andante tranquillo. An intense crescendo introduces the finale, which is a short passacaglia based on the first theme (introduced by violoncelli and contrabassi), over which, together with figures from other themes, the closing theme is woven, thus serving as a recapitulation for the entire symphony.”

Barber’s work has four distinct sections that correspond with the four movement scheme of the “normal” symphony, but they are all played without pause.  The work is unified by its thematic content, with the initial themes of the “exposition” serving (transformed) in the other sections.  This was a brilliant way for Sam to show off his musical gifts in the setting of a “symphony”.  At the core, Barber was a lyrical, melodic composer.  He didn’t often work in the manner, similar to Beethoven, with small motivic ideas that get developed in a musical cuisinart.  Barber had a gift for writing a long, flowing, gorgeous melody.  He very cleverly created his Symphony No.1 in a way that economically incorporated all the elements of symphonic writing, with the lyrical gift with which he excelled.

Some recordings of Barber’s first symphony play the work all in one long track, but others actually break the piece into four tracks (still played without pause).  I would recommend a recording that marks each section in this fashion, if you are looking to know where each partition starts.  One of my favorites is by Leonard Slatkin conducting the Saint Louis Symphony Orchestra.

Samuel Barber, Symphony No. 1 in one movement, on Spotify 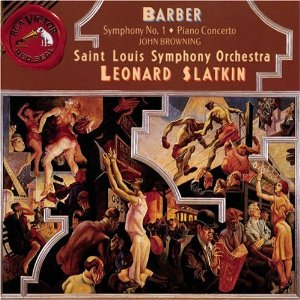 One of the other bits of information I mined from Heyman’s biography of Barber is that he looked closely at another one movement symphony when he was composing his first.  The work he studied was the Symphony No. 7 by Jean Sibelius, which is also in a single movement.  I have to confess that I had avoided the music of Sibelius for a long time, a prejudice I picked up trying to emulate my mentor.  My teacher thought that Sibelius’s music contained some potentially bad habits for the developing composer to imitate.  At the time, I lived to please my mentor, so I immediately began scoffing at every note of the Finnish composer.  Knowing that Sam Barber had looked so closely at a Sibelius symphony gave me the mental permission to look closer at it myself.

The idea of a one movement symphony by Sibelius is even more curious than the one by Barber.  Jean Sibelius is a composer that wrote BOTH multi-movement symphonies AND picturesque tone poems.  What made his Symphony 7 an actual symphony and not something else?  This is a question that Sibelius himself deliberated about at some length.  The piece was premiered with the title “Fantasia sinfonica” (symphonic fantasy), and only later on did Jean finally call it his Symphony No. 7.  It actually was the last symphony he completed, although he lived another 30 or so years after it was completed.

The form and construction of Symphony 7 is strikingly original, idiosyncratic, and truly unique.  It is somewhat ironic that it is composed in the key of C major, a tonality once thought to be used up with nothing left to offer.  Ralph Vaughan Williams commented, “only Sibelius could make C major sound completely fresh”.  Although there are several tempo changes in the movement, Sibelius moves through them seamlessly.  One really cannot break this work up into sections in the fashion we did the Barber composition.  Even the important themes of Sibelius seem to sneak up on you, like out of a mist.  The eminent Donald Francis Tovey wrote:

“In any tolerably competent performance of a typical work of Sibelius, the listener my rest assured that if he finds that an important melodic note has been in existence some time before he was aware of it, the composer has taken special trouble to conceal the beginning of that note.  If the listener feels that unformed fragments of melody loom out of a severely discordant fog of sound, that is what he is meant to feel.  If he cannot tell when or where the tempo changes, that is because Sibelius has achieved the power of moving like aircraft, with the wind or against it.”

Sibelius has hit upon a new approach to symphonic composition.  Careful study of the score could reveal ten or more actual themes, yet the work is unified and economical.  Sibelius has used just a handful of smaller musical germs that have become the DNA of all the themes.  These musical ideas are transformed, recombined, pressed into service as both main theme and accompaniment figures, and are all bound to the home key of C major.  It is a remarkably original achievement, and it serves as Sibelius’s last word on the subject of “symphony”.

Jean Sebelius, Symphony No. 7, on Spotify

It is not that Jean Sibelius didn’t try to compose another symphony.  There were sketches and attempts at an eighth, but Jean was never satisfied with it.  I believe his attitude was that if he didn’t have something better to offer than his seventh, he wouldn’t publish anything more.  He must have believed this with great conviction, for his wife told a story of a day in 1943:

“In the nineteen-forties there was a great auto da fé at Ainola,” she said. “My husband collected a number of manuscripts in a laundry basket and burned them on the open fire in the dining room. Parts of the ‘Karelia Suite’ were destroyed—I later saw remains of the pages which had been torn out—and many other things. I did not have the strength to be present and left the room. I therefore do not know what he threw onto the fire. But after this my husband became calmer and gradually lighter in mood.”

That fire insured that the world would not know what was in the attempts at an eighth symphony for Sibelius.  I must respect his wishes, for in any case his Symphony No. 7 is going to keep me busy for quite a while.

3 thoughts on “All Four in One, or One For All”