I had difficulty narrowing down my choice for the fourth and final entry in this series on string quartets.  There is so much music written for four strings, and the majority of it seems indispensable to me.  Brahms, Schubert, Tchaikovsky, Dvorák, Ravel, Debussy all wrote masterpieces for the genre.  Charles Ives, Samuel Barber, John Adams, Philip Glass and many other notable American composers have all contributed to the repertoire.  I almost finished this series with a work by Elliot Carter, whose five String Quartets are some of the most challenging pieces ever conceived.  The players often have independence of not just melody and harmony, but rhythm and meter as well.  In fact, in Carter’s second string quartet, he instructs the players to sit as far apart as possible, so that it appears they are playing four completely different pieces simultaneously.  I abandoned the idea of writing about Carter’s quartets, as I am not sure I even have the words to describe the experience of listening to them. Ultimately, I chose the prolific Dmitri Shostakovich to represent part four of my series.  His 15 string quartets are a priceless contribution to the quartet repertoire.  Unlike the big public symphonies, Shostakovich’s quartets were more intimate, private works.  As such, they garnered less scrutiny from the Stalinist dictatorship.  I wouldn’t say Dmitri was completely free to compose as he liked in the quartets, but certainly had more latitude than in the orchestra works.  His String Quartet Number 8 in c minor is one of the most performed of the group.

Shostakovich’s eighth quartet was composed quickly over a span of three days in July of 1960.  Dmitri had visited Dresden to write film music for Five Days, Five Nights, a film about the World War II bombing of Dresden.   On the surface, the somber tone of the composition might seem to be a reaction to the wartime devastation of that fire bombing.  In fact, the score is dedicated “to the victims of fascism and war”.  In reality, the eighth is a very personal work about Shostakovich himself, who was despondent and nearly suicidal at the time.  Two major life events were depressing Shostakovich at this time.  First he received a devastating diagnosis about his health, that he suffered from Amyotrophic lateral sclerosis.  This crippling disease of debilitating muscle weakness is often known in the United States as Lou Gehrig’s disease.  The second personal crisis for Dmitri was his reluctant joining of the communist party, a move made for survival, and to preserve a chance at employment in his compositional career.  Shostakovich attended meetings he had to attend, and said in public the things he was told to say, and all the while hated himself for it. 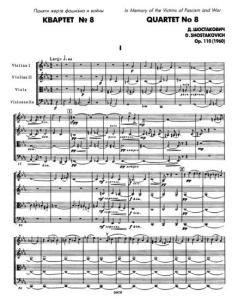 It is relatively easy to see that the eighth quartet is all about Shostakovich himself.  The very first movement opens with the DSCH motif that is the personal signature of Shostakovich.  He included this in a number of his works, and it is worth giving a little explanation of this musical cryptogram.  Dmitri’s name in German transliteration would be spelled Dmitri Schostakowitsch.  Taking his initials from that spelling, we get the letters DSCH, or in German De, Es, Ce, Ha.  Again, in German musical notation, those letters correspond to the notes D, E flat, C and B.  Shostakovich happened upon this likely in a study of Johann Sebastian Bach’s music, where a B-A-C-H motive appears in many prominent works.  Once the DSCH motif is recognized for what it is, it is like Dmitri is shouting “ME, ME, ME” all over the opening of the piece.

Shostakovich had an incredible memory, for both his compositions and any other music he ever heard.  The eighth quartet is littered with quotations from his other works.  The first movement has allusions to Shostakovich’s First and Fifth Symphonies, as well as a disguised bit of Tchaikovsky’s Pathetique Symphony.  The second movement includes quotes from his Dmitri’s Second Piano Trio, as well as more of the DSCH motive.  The third and fourth movements have quotes from other of his own compositions, with the fourth movement including a little “Muss es sein?” recalling Beethoven’s Opus 135 quartet.  All of these self-referential snippets woven into the fabric of the eighth quartet are about Shostakovich himself, not the wartime bombing of Dresden.

Fortunately for us and string quartet players everywhere, the depressed Shostakovich did not commit suicide after this quartet.  He went on with life, and finished seven more quartets for the repertoire.  His String Quartet Number 8 remains one of the most personal and intimate pieces he ever composed.  It was chosen to be played at his funeral years later, and more appropriate music is hard to imagine.

The hope is that my short exploration of string quartets in the last four posts might inspire someone to listen to some music they might not previously considered.  A live concert by a top quality quartet ensemble is a powerful, intimate musical experience.  It is one I highly recommend trying.  Recordings of string quartets are plentiful, and well worth your time to listen.  I hope you enjoy.

7 thoughts on “Four By Four For Four, Part IV”