A couple of months ago, I wrote a bit about the recordings of the delta bluesman, Robert Johnson.    The mere 42 tracks left by Johnson at the time of his death are some of the most influential music ever recorded.  That thought got me thinking about what other recordings have had a giant influence in the world of music.  The first thing that came to mind was the legendary recordings of Louis Armstrong and his Hot Five and Hot Seven.  If you have ever played a jazz solo, or picked up a trumpet, or sang a popular song, you owe a debt of gratitude to Louis Armstrong. 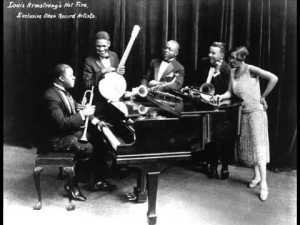 Nicknamed “Satchmo” or “Pops”, Louis Armstrong followed Joe “King” Oliver from New Orleans to Chicago and played in Oliver’s Creole Jazz Band.  Armstrong followed the advice of his second wife, piano player Lil Hardin Armstrong, and broke away from Oliver to record under his own name.  The Hot Five and Hot Seven groups were the first recordings made with Louis leading his own group.  They were studio recordings made in Chicago from 1925 to 1928.  There were actually two different Hot Five bands with different musicians playing with Armstrong.  The instrumentation was a classic New Orleans jazz group, with a trumpet, clarinet and trombone horn line, backed by a piano and either a guitar or banjo.  The Hot Seven session added drums and a tuba to the group.

Pops blows some great trumpet on this recording.

Although all of these recordings have roots in the collective improvisation style of a Dixieland band, increasingly it was Louis Armstrong’s trumpet solos and vocals that stood out.  Take the opening trumpet line of “West End Blues” for example.  Satchmo just stood up with his horn and blew, and out came this solo that trumpet players have been practicing ever since.

A careful listening of these recordings reveals a wide range of emotional expression.  These were made to be popular records, of a certain length to fit on a single to sell.  Many people point out the occasional flub or missed note, but for me there is a great deal of artistry packed into the 3 or 4 minutes of each track.  There is melancholy sadness underlying  tunes like “St. James Infirmary”.

This sorrowful tone is exaggerated even more on a slower version recorded by Pops later in his career.

On the opposite end of the emotional spectrum is the unbridled fun of “Irish Black Bottom”.  The “black bottom” was a popular dance in the 1920’s.  I will refrain from trying to demonstrate it, and I am sure you will thank me for my restraint.  This novelty tune pretends that this dance was becoming all the rage in Ireland.  It’s a record that doesn’t try to be anything but fun.

These records are still hot after all these years.  They have been collected as the Complete Hot Five and Seven Recordings, and every last one is worth hearing.  A great place to start might be the selections in The Best of the Hot 5 & Hot 7 Recordings.  Pops was a star for decades, even displacing the Beatles from the number one spot on the Billboard charts during the height of their popularity.  Armstrong taught us how to swing, to phrase, and how to solo.  He is definitely one of the foundations of American music.

The Best of the Hot 5 & Hot 7 Recordings on Spotify

6 thoughts on “Pops Is Still Hot After All These Years”