It is nearing the end of August, and every mother of school age children I see has that desperate look in their eye that says, “Is it September yet?”.  The beginning of a new school year is nearly upon us, marked by the back to school sales of number 2 pencils, backpacks and pencil boxes with either Hello Kitty or The Incredible Hulk, depending on the students preference.  It’s possible I’m dating myself here, and back to school shopping is actually dominated by smartphones and tablet computers.  Do schoolhouses have more than one room these days?

Not many composers remind me of academia as much as the music of Brahms (even though he never went to college himself).  (Ed. Note:  Mike, you can stop reading here if you like, I won’t be offended.)  Johannes Brahms seems like a bit of a stuffy fellow, but he does have some redeeming qualities.  First, he rocked one amazingly awesome beard, which makes me want to give him the benefit of the doubt.  Second, he hung out almost daily at a tavern in Vienna called the “Red Hedgehog”.  I am certainly going to give that name to the bar in my family room, if I ever have opportunity to install one.  Lastly, although he was often grumpy with adults, he was kind to children, and also generous with his wealth later in life to music students (only after they were sworn to secrecy).

The University of Breslau granted a Doctorate of Philosophy to Brahms in 1879 to honor him.  He wrote a letter of thanks, but his friend who had nominated him to the University for the honor encouraged him to compose an orchestral work as a gesture of musical thanks.  In 1880, the Akademische Festouvertüre was composed and offered to fill this measure of gratitude to the folks at Breslau.  The Academic Festival Overture (in English) is one of the most performed works of Johannes Brahms, and it shows off both his formidable compositional technique and a cheeky sense of humor.  Brahms himself conducted the premiere in January of 1881, in a ceremony in front of the university’s Rector, Senate, and Faculty of Philosophy.  A formal occasion that was expected to have formal music from a very formal composer.

Instead what they got was “a jolly potpourri of student songs”.  To appreciate the contrast, one has to realize that German university students of the 1880’s did their song singing mostly in beer halls.  Brahms had used a handful of basically college drinking songs to fashion his overture!  There seems to be much more emphasis on the “festival” than the “academic”, and a very cheeky stunt it was in performance.  I have to admit that the humor of this was lost on me when I first heard the overture years ago.  I simply didn’t know these drinking songs.  I could appreciate the “academic” part, which is Brahms’  treatment and development of the themes and his trademark mastery of counterpoint.  Admittedly, this is still Brahms and he doesn’t give us a full-fledged Bacchanale, but he is pushing the envelope a bit given the occasion for the performance.

For those of you keeping score at home, the tunes Johannes included in the overture are:

“Hochfeierlicher Landesvater” (Patriotic Song to the Father of the Country)

“Was kommt dort von der Höh?” (What Comes There from on High?)

I suppose to get the full effect of the overture, one should spend some time in a beer hall drinking and singing these tunes. I should give it a try in the name of research.  One esteemed colleague of mine has actually promoted the idea that beer and tunes are two of the three things needed for happiness in life. The third item is not really a subject for this blog, but I have been assured that everything after these three items are “in excess of requirements”. 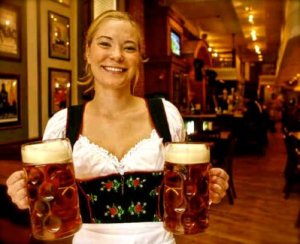 I can’t say that I’ve been able to come up with a convincing argument to refute this theory.