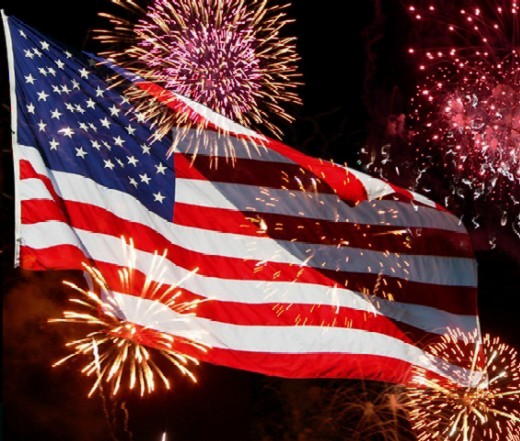 The fourth of July is Independence Day in America, bringing with it fireworks bursting in air, hamburgers sizzling on the grill and a celebration of the hard-earned freedoms that this country enjoys.  I plan to offer a series of posts celebrating orchestra music composed by American composers for the entire month of July.  Hopefully, I can offer some thoughts that inspire you to pull up a chair with a slice of apple pie and take a listen.

The first name that comes to my mind when you mention American composers is Samuel Barber (1910-1981).  Even by limiting myself to orchestra music, there are more musicians that I could write about than will ever fit in one month of posts.   I have, however,  a very personal connection to the music of Barber, and honestly love every single note he has composed.  I wish my own musical voice was as solid, intelligent, and lyrical as Sam’s.  His work is the only place for me to start an exploration of American composers.

Barber’s first composition for orchestra was the Overture to The School for Scandal, Op. 5, written while he was still a student at the Curtis Institute of Music.  Barber was an incredibly well-read individual, and the title of this work refers to a play, The School for Scandal, by an 18th century Irish playwright named Richard Brinsley Sheridan.  Sam didn’t set the entire play to music, but rather, took it as an inspiration and wrote an orchestral piece to reflect the moods and spirit contained the comedy.

Overture to The School for Scandal

Needless to say, Barber graduated the Curtis Institute.  Samuel Barber may be the only composer we meet in this series of posts that made his living entirely as a professional composer.  That is to say, he earned enough with prizes, commissions, royalties and fellowships, that he did not have to take up a teaching position or even a paper route to make ends meet.  The American Prix de Rome prize that he won in 1935 at the age of 25 allowed him to live and work in Europe that year, and during that time he did much of the work on his Symphony No. 1, Op. 9.  This is a work in one movement, but much longer than the above overture.  Here is Barber’s own description, quoted from his biography “Samuel Barber, The Composer and His Music” by Barbara Heyman:

“The form of my Symphony in One Movement is a synthetic treatment of the four-movement classical symphony. It is based on three themes of the initial Allegro non troppo, which retain throughout the work their fundamental character. The Allegro ma non troppo opens with the usual exposition of a main theme, a more lyrical second theme, and a closing theme. After a brief development of the three themes, instead of the customary recapitulation, the first theme in diminution forms the basis of a scherzo section (vivace). The second theme (oboe over muted strings) then appears in augmentation, in an extended Andante tranquillo. An intense crescendo introduces the finale, which is a short passacaglia based on the first theme (introduced by violoncelli and contrabassi), over which, together with figures from other themes, the closing theme is woven, thus serving as a recapitulation for the entire symphony.”

I think just about everything that Barber has published still has a recording in print.  Orchestra music, piano music, concertos, songs,  and opera are all available and all come highly recommended by your humble author.  Even the Symphony No. 2 is available, a work which Barber tried to withdraw and destroy the score and parts at his publisher!  I can assure you that no other American twentieth century composer has a problem with people recording their music against their wishes.

This is not the first time I have visited Sam’s music on this blog, and surely will not be the last.  May your apple pie be at least half as good as Barber’s music, and have a safe and happy holiday!